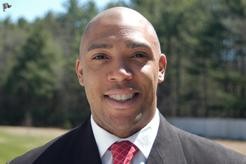 Ka'Shauna Cook comes to Madeira after receiving her Bachelors of Arts in Business Marketing at West Virginia State University and her Masters of Art in Coaching and Athletic Administration from Concordia University. While receiving her Masters, Ka'Shauna served as a head coach for the Germantown Lady Panthers organization and the Varsity Head Coach at Col. Zadok Magruder High School. During her tenured at Magruder, Ka'Shauna received Montgomery County 3A Coach of the Year and led the Colonels to their second regional finals appearance in the last decade. Ka'Shauna is passionate about helping female athletes develop a strong educational foundation while pursuing their athletic endeavors.

Rod Montrie began working at Madeira in 1992. He earned a bachelor's degree from the University of Maryland, College Park. Under Coach Montrie’s guidance, Madeira has remained at the top of the Independent School League, winning the ISL pennant in 2003 and 2016, and the Virginia Independent School Athletic Association State Championship five times - 2001, 2002, 2003, 2005, and 2006. Coach Montrie also garnered VISAA Coach of the Year accolades on five separate occasions, and in 2007, was selected as the recipient of the National Interscholastic Swim Coaches Association's David H. Robertson Award for Coaching Excellence. In 2015, he and the 2003 Swim and Dive team were inducted into the Madeira Athletics Hall of Fame’s inaugural class. Coach Montrie has led the Snails to 25 consecutive winning seasons, 24 consecutive top-ten state finishes, six individual and twelve relay All-Americans, three VISAA Swimmers of the Year, one All-Met Swimmer of the Year, and over 50 All-League, All-State, or All-Met swimmers. He has also helped over 25 Madeira swimmers advance to compete at the collegiate level. Coach Rod Montrie has solidified himself as a staple of success for Madeira Athletics, and has become a fixture in the swim community in the DMV.

Jon DiCandilo comes to The Madeira School with 20 years experience educating others in fitness and health. Jon is a Certified Athletic Trainer (ATC) and Certified Strength and Conditioning Specialist (CSCS). Most recently, Jon worked in Japan for three years with a professional men's basketball team as their strength coach. Prior to that, Jon was the Head Athletic Trainer at The Hill School in Pennsylvania. Jon has spent over 15 years of his career working with high school athletes. Both of Jon's previous roles provided him with a strong understanding in athletes development and best practices to return to sport concluding injuries. Jon loves working with students in their life long pursuits of learning.