Welcome to our newest faculty and staff 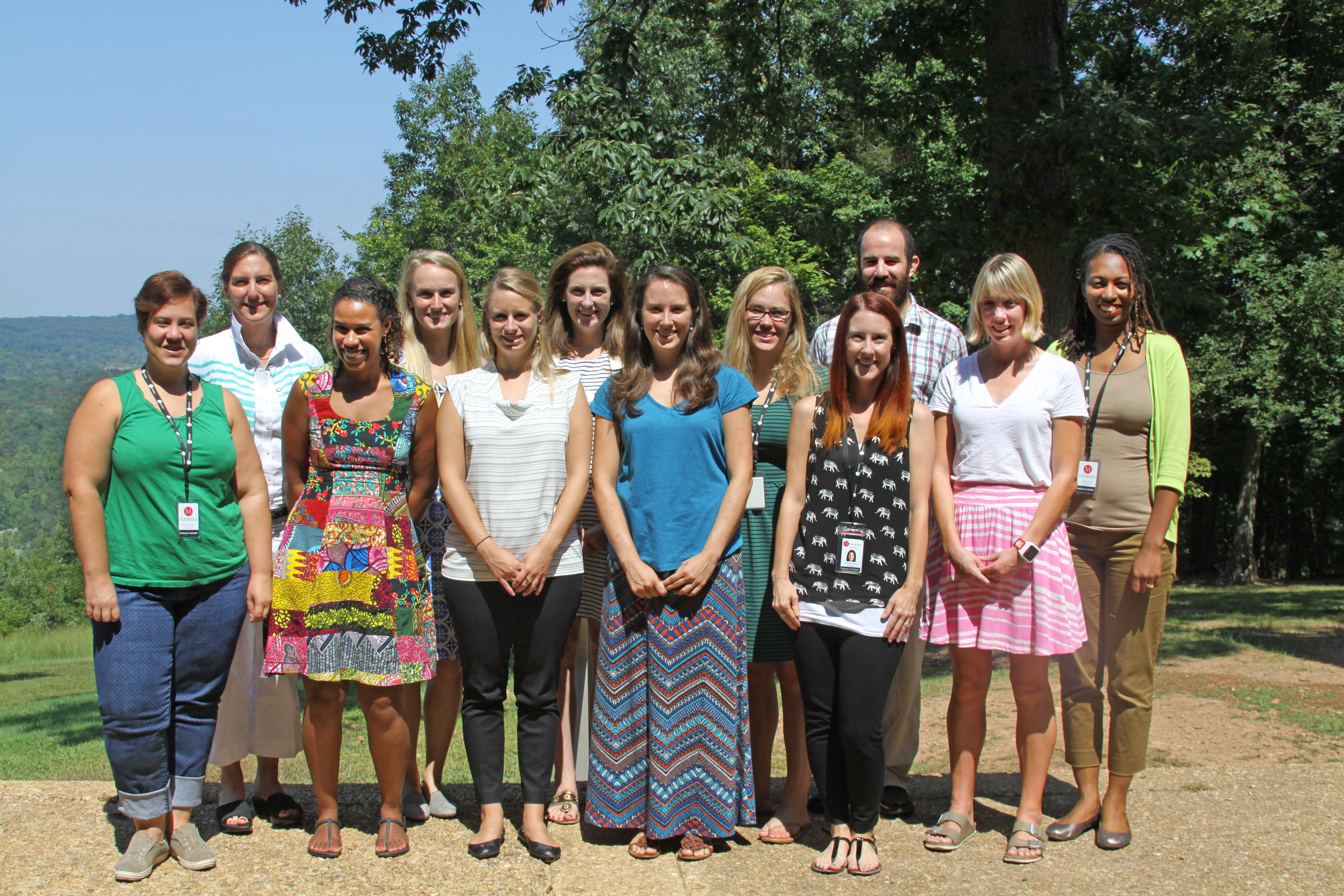 Madeira is pleased to welcome an impressive group of new faculty and staff members joining us this school year. We look forward to seeing their contributions in the classroom and around campus.

Innocentia Afa joins Madeira as an assistant director of admission. She comes to Madeira from Legacy International, an international educational non-profit based in the central Virginia area. During her time at Legacy, she served as program manager and outreach coordinator, recruiting and mentoring hundreds of students from around the United States and all over the world. At Madeira, Ms. Afa is looking forward to working with prospective students in the northeastern part of the country and running events. Ms. Afa completed her undergraduate degree in Communication and International Studies at Randolph-Macon Woman’s College and found her time there to be a rich and rewarding experience. As a result of her experience at a woman’s college, she feels very much at home at Madeira and looks forward to being actively involved on campus. Ms. Afa enjoys being outdoors, usually hiking or on her bike, and looks forward to exploring the D.C. food scene. She is passionate about justice and environmental issues and hopes to get more involved in these areas at Madeira.

Rachel Burns joined the Development Office as data systems coordinator in 2014. Rachel received a bachelor’s degree in Interpersonal Communication and a minor in Anthropology from the University of Central Florida. Following the completion of her degree, she took a gap year and spent the year living in London, volunteering for a local British nonprofit. Prior to joining the team at Madeira, she worked in the Development Office at Capitol College, a private STEM-focused college in Maryland.

Sue Cabot joins Madeira as athletic director this year. She is a graduate of Slippery Rock University in Pennsylvania, and earned her master’s degree in Health Education at The College of New Jersey in Trenton, NJ. Before arriving at Madeira, Ms. Cabot was director of athletics at Kingswood Oxford School in Connecticut. She also served in the Athletics Department at The Peddie School in New Jersey for nearly 25 years, with 12 of those years as director of athletics. At Peddie she expanded the Interscholastic Athletic program to include 53 athletic teams, and honed a particular focus on equity between male and female sports, significantly improving visibility and support of athletic opportunities for female student-athletes. In addition, she oversaw creation of a master plan for athletic facilities, working with the board, alumni and development offices, as well as architectural firms, to develop the long-range master plan and to assist in raising funds for the projects.

Benjamin Cohen will join the Mathematics Department full time after serving as a substitute at Madeira in 2014-2015. Mr. Cohen has always had a love of mathematics, and earned his bachelor’s degree from the University of Virginia in 2010. After graduation, he taught fifth and sixth grade math and worked at an outdoor adventure center in Virginia. Mr. Cohen will be teaching Algebra II, Pre-Calculus, and BC Calculus. He will also coach cross country.

Matti Donkor joined the Madeira admission team this summer. Ms. Donkor earned a bachelor's degree in African Studies and a minor in International Relations from Mount Holyoke College. She pursued her master's degree at Teachers College, Columbia University in International Education Policy. Ms. Donkor’s interest in international education issues stems from her experience growing up with two parents working at United Nations. Growing up Ms. Donkor lived in over eight countries including Ghana, Italy, Switzerland, and Uganda. Prior to joining the team at Madeira, she worked in the Admission Office at Miss Porter's School in Connecticut. Having attended a single-sex college and a boarding school, Ms. Donkor is passionate about the opportunities that Madeira has to offer. She and her family join the community as campus residents and she will serve as a dorm affiliate in Main.

Lucy Gerrity comes to Madeira as our admission office coordinator after working as the marketing and communications assistant for a private school in Yarmouth, Maine. In her role at Madeira, Ms. Gerrity will coordinate admission visits and scheduling while also overseeing various admissions territories, focusing on the western part of the US. In addition to working with admissions, Ms. Gerrity will coach JV field hockey and serve as the assistant coach for varsity lacrosse. She graduated from Colby College, with a bachelor’s degree in Human Development. While at Colby, she played four years of varsity lacrosse, and captained the varsity field hockey team. Ms. Gerrity is proud and excited to be a member of the Madeira community and have the opportunity to mentor and influence girls from the first step they take in the Admission Office to the playing field.

Lauren Hancock joined the Development Office as assistant director of annual giving at Madeira in the summer of 2015. She is a graduate of Barnard College and remains connected as a volunteer. Prior to arriving at Madeira, Ms. Hancock worked in annual giving at The George Washington University. She is proud to be the daughter of a Madeira alumna.

Cynthia Knight joined the Development Office in February of 2015 as a major gifts officer. She hails from various locations, including Boston, Chicago, and Sun Valley, Idaho. Ms. Knight has several years of business experience and has completed a J.D. Most recently, she worked in the development offices for the University of Maine School of Law and The Portland Museum of Art. Ms. Knight is well versed with the secondary private school environment. She is a product of the private school sector and her four children all attended boarding schools. She enjoys a variety of sports, and has taught field hockey at the collegiate level and is a children’s certified snow sports instructor. Cynthia’s love of sports has transcended to her children, who have all matriculated to college as Division I athletes. Cynthia is passionate about supporting the excellent educational and athletic components at Madeira.

Jillian Meyer joins Madeira’s faculty as an English teacher this year and the community as campus resident. Ms. Meyer holds a Bachelor of Arts degree from George Mason University and a M.F.A from Hollins University. Prior to coming to Madeira, she worked at Oldfields School in Maryland. She will serve as assistant dorm director in West Dorm.

Camila Salaverria joins the Co-Curriculum Office after serving as an Adult on Duty during the 2014-2015 school year. Ms. Salaverria earned a bachelor’s degree in Liberal Studies from Marymount University and a master’s degree in International Sustainable Development from the School of International Training. She has previously worked for the Brookings Institute and UNICEF. Ms. Salaverria will also serve as the assistant dorm director in Main Dorm this year.

Ali Heck Southworth began working in the Communications and Marketing Department in the summer of 2015. She has been a campus resident since 2010, has served as a dorm adult for three years, and been an assistant JV softball coach for two seasons. Previously, Ms. Southworth was a photo editor at TMG Custom Media and Feld Entertainment. She earned a bachelor’s degree in Journalism from Auburn University and master’s in Photojournalism from Boston University.

Cayce Troxel joined the Development Office in the summer of 2015. She graduated from the University of Virginia in 2012 with a B.A. in Anthropology. As a University of Virginia student, Ms. Troxel interned with the School’s Athletics Media Relations Department and Alumni Association. She served as a stewardship coordinator after graduation, as well as promoting student and young alumni philanthropy. At Madeira, Ms. Troxel hopes to use creative ideas to acknowledge and honor Madeira’s donors. An avid tri-athlete Ms. Troxel will as the assistant swim coach for Madeira swim and dive team.

Nikki Wellington comes to Madeira’s Math Department from Harrisonburg High School. She earned her bachelor’s degree in Mathematics and Anthropology from James Madison University, and her M.Ed. in Secondary Education with mathematics concentration at Vanderbilt University. Ms. Wellington has a love of musical theater and volleyball, and is thrilled to be joining the volleyball coaching staff at Madeira this fall.

Isabel Yordan joined Madeira’s Development Office as a major gifts officer in 2015. Previously, M.s Yordan worked with The Nature Conservancy in Connecticut as an associate director of philanthropy. Prior to the Conservancy, Ms. Yordan spent five years with the New York Public Library, holding several positions in their Development Office. Ms. Yordan is a graduate of Middlebury College and the Loomis Chaffee School. She is an active volunteer for both schools as class agent and reunion co-chair.