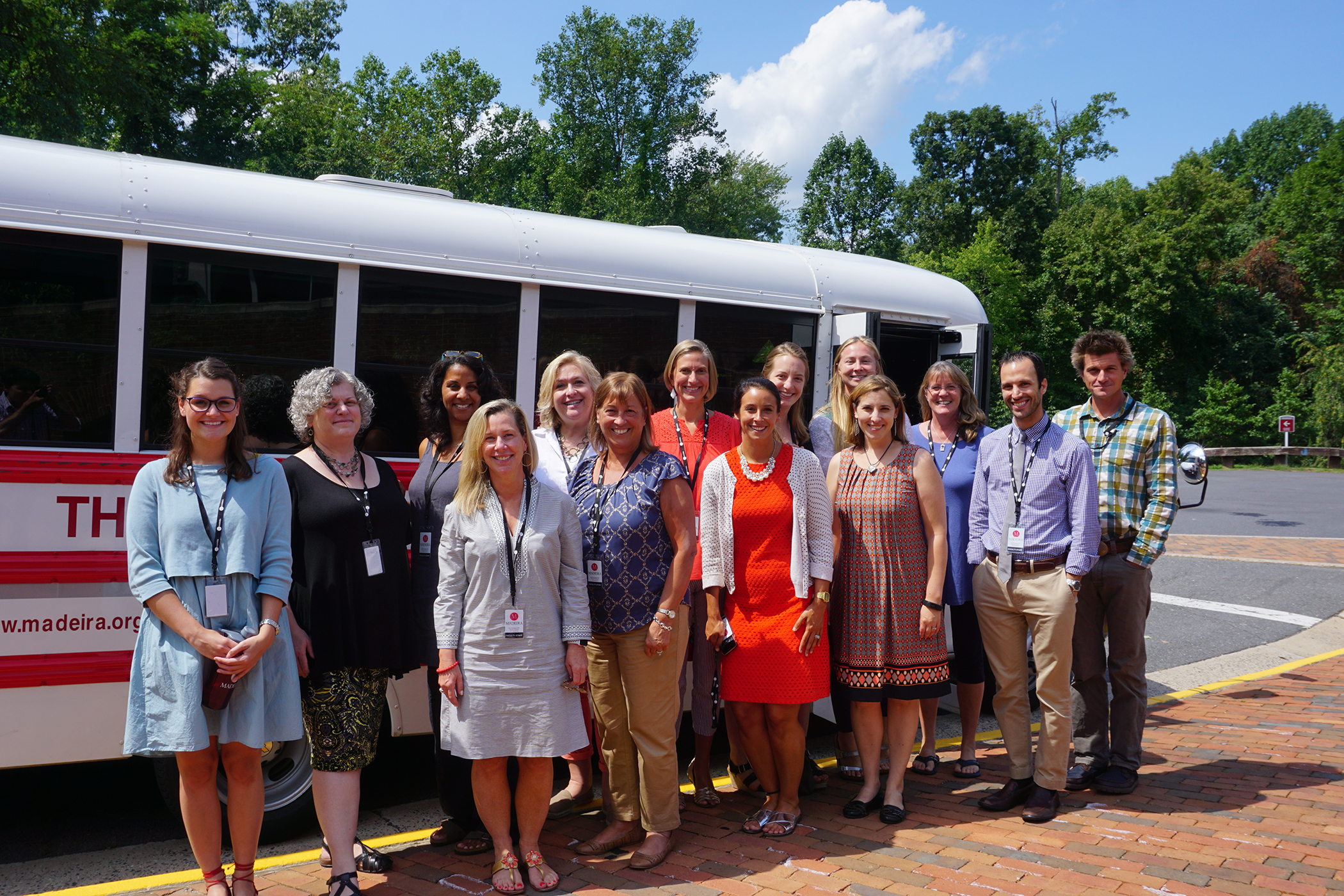 Allow us to introduce you to the new faces at Madeira (and a reintroduce a few familiar ones).

Melissa Bejjani joins the Co-Curriculum department after several years at George Mason University as the Assistant Director of Arab Studies Institute. Melissa has also worked as a Research Coordinator at the Ali Vural AK Center for Global and Islamic Studies. She is currently completing her PhD in Political Science from George Mason University. She is fluent in Arabic.

Adria Black joined the Development Office as the Associate Director of Alumnae Relations in July. Adria graduated from Madeira in 1986, and she has been working most recently as the Director of Alumni Programs and Special Events at The Beauvoir School.

Kelly Chandler comes to The Madeira School after receiving her Bachelors of Arts in Interdisciplinary Studies at Vanderbilt University and her Masters of Science in Education from the University of Pennsylvania. While in Philadelphia, Kelly served as the head lacrosse coach for Ultimate PA 2022 and the volunteer assistant at The Agnes Irwin School, where she helped lead the Owls to a 2016 Inter-Ac Championship and Runner-Up in PAISAA. During her time at Vanderbilt University, Kelly was a four-year starter on the varsity women’s Lacrosse team, helped lead the team in scoring for the 2016 season and was named to the All-Big East second team. Kelly attended Episcopal High School, and is excited to be returning to the D.C. Metro area and the Independent School League. Through her experiences, Kelly has developed a personal passion to make a difference in the lives of others, specifically adolescents and young adults. Kelly views education and experiential learning as the best means to make an impact, and is excited to facilitate that growth within the Madeira community.

Dr. Amanda Curtis has joined us in the math department. Born in Kansas City, Dr. Curtis attended Wellesley College for her undergraduate and received her Master's and PhD degrees from University of California, Santa Barbara. She recently relocated from California to northern Virginia and enjoys running

Heather Fetrow joins the Madeira Fine Arts department this fall as the Director of Choral Music.  Ms. Fetrow has directed choral ensembles previously at the Browning School in New York City and the Hun School of Princeton.  She is currently the Associate Director of Strathmore Children's Choir's Treble Chorus in Rockville, MD. She holds degrees in Music Education, Choral Conducting and Vocal Performance and Pedagogy from Westminster Choir College in Princeton, New Jersey.

After graduating from Madeira in 2007, Caitlyn Goodman earned a Bachelor of Arts in Broadcast Journalism from American University and as Master of Arts in Government with a concentration in Political Communications from Johns Hopkins University. Caitlyn comes to Madeira from Chevron, where she has been working as a Federal Government Affairs Coordinator.

Carleen Kelley joined the Health and Wellness Center in the summer of 2017. Previously Mrs. Kelley worked for three years at Our Lady of Good Counsel High School in Olney Maryland, where she was a school nurse. Her background in nursing is Trauma/Critical Care and worked for many years as a staff nurse, clinical specialist and educator in Critical Care. She holds a B.S.N in Nursing from the University of Virginia and a M.S. in Trauma and Critical Care Nursing from the University of Maryland. (Carleen has two children, daughter Erin, a recently graduate from UVA and now a Pediatric ICU nurse at INOVA, and son Brian, a 3rd year student at UVA.  Carleen is thrilled to become a part of the Madeira community.)

Sheila McGrory joins the English Department this year. Previously she taught at Phillips Andover, the University of Vermont, Middlebury College, and Rice Memorial High School. She has also worked as a professional writer and editor in the nonprofit world, and she’s excited to bring her passion for writing to the Madeira classroom. She holds a BA in English from Wake Forest University and an MA in English from the College of William and Mary.

Giulia Pagano joins Madeira’s World Language department for the 2017-2018 academic year as the French and Spanish teacher. Ms. Pagano graduated in May 2017 from Dickinson College with a B.A. in French and Spanish and earned a dual teaching certification for both languages in the state of Pennsylvania. She studied in Waterloo, Belgium in 2010 through the Rotary Youth Exchange Program. In addition, she worked as an English au pair in Málaga, Spain. Lastly, she attended the University for Foreigners of Perugia. As a bicultural and multilingual individual, Ms. Pagano is dedicated to enriching each of her classes with her passion for languages and dedication for cultural awareness. Through this, it is her hope that her students will understand the amazing struggle and incredible value of what it is to be a life-long language learner.

Chloe Post joins Madeira from Washington Fine Properties, where she worked as a Marketing Coordinator. She earned her Bachelor of Arts in Art History and Education from Sewanee, The University of the South, and hails originally from New Orleans.

Josh Singer joins the Madeira Math Department teaching courses across the spectrum in grades 9 through 12. Mr. Singer is a native of the Bethesda/Rockville area, having graduated from Whitman in Montgomery County. He worked at The Charles E. Smith Jewish Day School as well as The McLean School in Potomac where he taught middle and high school math courses in each position. Additionally, Mr. Singer served as Dean of Students at The McLean School in the 2011-2012 school year. Most recently, Mr. Singer worked at The Out-of-Door Academy in Sarasota, FL, continuing to teach math courses in grades 6 through 12. Additionally, he held administrative roles as Dean of Student Life and Dean of Faculty Development. He earned his BA from Skidmore College in Mathematics and continued to earn his MSEd from Johns Hopkins University in the field of School Administration & Supervision. When not at school, Josh loves golfing, running, going to the gym, and skiing!

Nurse Angela Sapp attended Spelman College and the University of Maryland. Angela was a pediatric ICU nurse at Children’s Hospital in DC and has been working at Beauvoir as the summer nurse for the past three years.

Dr. Lee Walker joins us as a Math Teacher this year. A graduate of the Darlington School in Rome GA, Lee attended Centre College earning a BS in Physics. After earning a PhD from the University of Florida, Lee researched Electron Magnetic Resonance to study the energetics of photosynthetic organisms. After leaving the lab, he focused on his framebuilding company (Syndrome Cycles) and coaching swimming.  He credits his love for working with kids and that for inspiring him to get back into Academia.  After subbing in Science at Madeira last year, he’s happy to be a part of the Math team!

Sarah Yarborough earned her B.A. in English Literature and Theatre from Smith College (Northampton, MA) and is a Madeira School alumna, Class of 2009.  Previously, Sarah worked in residential life at boarding schools in Maryland, Michigan, and Jeju-do, South Korea. After three summers working for Madeira's Girls First! program, she joined the Dean of Students Office in 2017 as the Assistant Dean of Students for Campus Life.

Patti Collins returned to Madeira on March 1 as a Principal Gift Officer. Patti previously worked at Madeira from 2008-2014 in roles both in Annual Fund and the Campaign before departing to work for Easter Seals.