The Hunt for Frosty 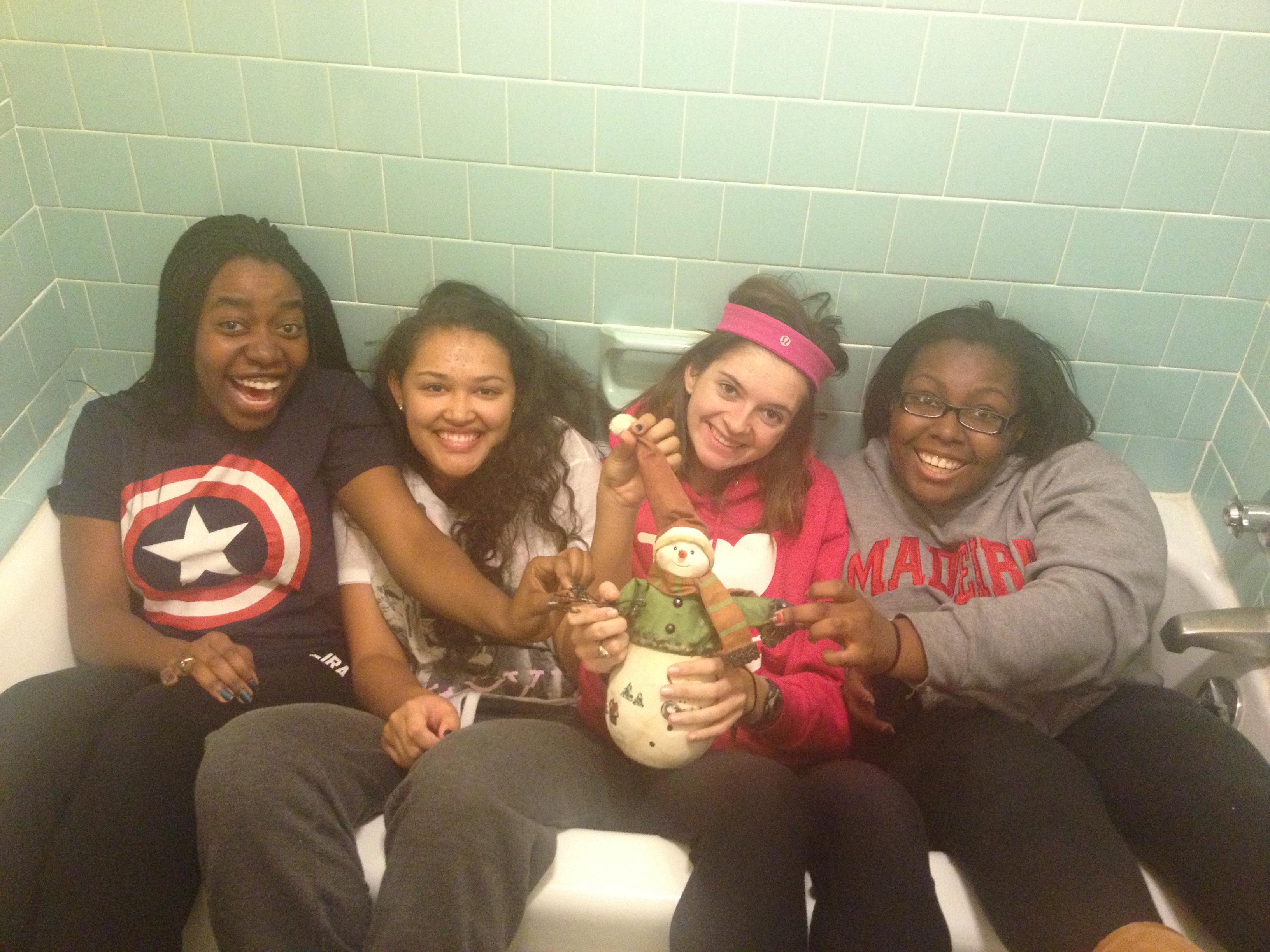 Frosty after being discovered!

Using the following clues, where do you think Frosty is hiding?

What a beautiful December day
Poor frosty almost melted away
His belly was starting to sag
After almost getting shot during laser tag
Now he's desperate to find a place to keep cool
So he doesn't turn into a pool
So hurry up walk, gallop, or trot
To find Frosty’s chilly new spot

Scroll to the bottom to see if you guessed correctly!

As the cold weather set in this year, Dean of Students, Kim Newsome’s  thoughts turned to exams, the annual scavenger hunt, the possibility of a snow day and ……the gnome! In recent years,  the Dean of Students office had hidden a garden gnome around campus.  The goal was for dorms to find him and  earn coveted points for the annual dorm  points competition.  Sadly, the gnome ran away to college with a recent Madeira graduate and there was a void on campus.  So Mrs. Newsome set about to find a replacement.   As she was decorating her home for the holidays Frosty appeared.  Though small in stature, his  cute coat,  snowy smile, and mystifying missives turned  the hunt to find him into a campus-wide phenomenon.

Frosty made his first appearance on the Madeira scene in December and quickly became campus’s most sought after item. When it was announced that East, Main, New, and West , North and South dorms could earn 25 points  when they found the illusive character to, they jumped at the opportunity.

At Madeira, dorm competitions are a big deal, and not just for the boarding students. Every girl is assigned a dorm, and their participation in games and events weighs heavily in the scoring system. Dorms compete all year long in events big and small, everything from the scavenger hunt ( brought to Madeira by Mr. and Mrs. Pratt) to the famous Madeira version of the Pillsbury bake-off , to Miss Greenway, and field day. At the end of the year the winning dorm is memorialized on a plaque in the student center, but what is really valued are the bragging rights of winning. So it was no surprise when the competition for finding Frosty became fierce. The game, which this year became more sophisticated with the addition of clues, works like this:

Step one: Frosty is hidden by the Dean of Students or an appropriate stand-in , like the Director of Residence Life.
Step two: An email is sent to all students giving a cryptic clue to the whereabouts of Frosty.
Step three: Students must find Frosty, submit a photo to confirm he has been found, and return him to the Dean of Students Office within 24 hours.

Within hours of the first clue being posted, Frosty was found by East Dorm, lurking by the Laurels, the  log cabin home of the Hamers.. “I was shocked and a little disappointed that it took only a few hours” recalled Ms. Newsome of the first round of the competition. “I really thought I was being clever and that it would take them [the students] days to find him. My mistake had clearly been to email the clue to the Dorm Faculty as well as the girls. They knew too much, and were helping to decode the clues. I knew in that moment that I had to step up my game.”

Midnight clandestine Frosty operations have now become part of her role as Dean of Students. “I am dreading the day when I run into campus security during one of these late night missions and I have to explain myself!”

But her efforts in making the game more challenging have been worthwhile; the last time Frosty went into hiding, it took nearly a week for him to be discovered.  Since the daffodils are now in bloom on the Oval, it seems likely that Frosty has retired to colder pastures. However, Mrs. Newsome assures us that the first flake of snow next year will likely signal his return.

He was staying cool in the ice-maker at The Hurd Sports Center!