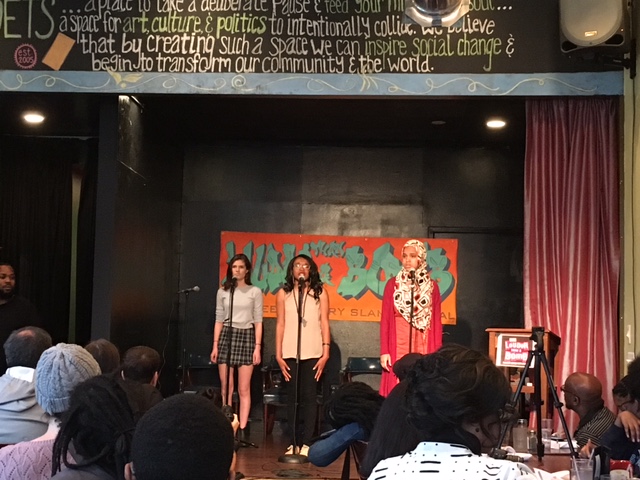 On May 7, 2016 the Madeira Slam Poetry Team, made up of Gaelyn Smith ‘16, Mona Hagmagid ‘16, Elfrieda Nwabunnia ‘17, and Mae Hunt ’17, won first place in the fifth annual Louder Than a Bomb DMV Teen Poetry Slam (LTAB) for the second year in a row. After progressing from preliminaries, the team was able to secure first place at finals. Fourteen schools competed for the title, but Madeira’s team crafted beautiful, stirring prose and performed in a way that effectively swayed the judges in their favor. The students performed about topics ranging from self-confidence and self-love to the treatment of women and mental illness. According to the organizers, the “goal of LTAB-DMV is not solely to promote a culture of literacy, critical thought, self-confidence, and powerful public speaking, but also to purposefully bring students together across dividing lines like race, religion, ethnicity, gender, sexuality, socio-economic status, and politics, to listen to, learn from, and bond with one another.”

Sponsored by Split This Rock and poetryN.O.W., the Louder Than A Bomb DMV Teen Poetry Slam Festival (LTAB) brings together poetry slam teams from DC, Maryland, and Virginia high schools for workshops, shows, ciphers, food and friends, and a team poetry slam tournament.

Slam poetry is defined as a fast pace and high energy competitive performance poetry, either done alone or in teams, without the use of props or musical accompaniment according to the National Poetry Society and Poetry.org. It was created in 1985 by a construction worker and poet named Marc Smith. Smith started Monday Night Poetry Reading, an open mic night, in Chicago and encouraged people to "perform" their work instead of just reading it. Marc Smith's idea behind the slam was to reclaim poetry because he felt as though "the very word 'poetry' repel[ed] people. Why is that? Because of what schools have done to it. The slam gives it back to the people... We need people to talk poetry to each other." At a normal slam, judges are randomly picked audience members who give the contestants scores from one through ten. All of the poems performed at a slam are original. At times the poems are motivated by politics, gender, injustice, current events and/or race but these poems can be about anything. The wide range of slam poems makes it easy to find a poem, or poet, who speaks to you.

According to Ms. Candia, the adult sponsor of the club, slam gives the poets a chance to "express themselves without apology, speak their personal truths to an attentive audience, and pose important questions without knowing the answer."