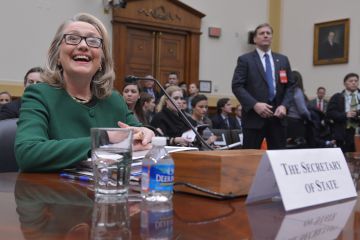 Tory Lynch ’14 found out about the rescheduled Benghazi hearing a week before it took place while working at her Co-Curriculum placement in the office of Congressman Brian Higgins, a democrat from New York's 26th district.

From the moment she knew it was a possibility, she looked forward to it. On January 23, the day of the hearing, she arrived at the office and spent the morning doing various tasks: she researched a bill, answered the phones, and ran errands. Knowing the hearing would be crowded and space would be limited, she got to the committee hearing rooms an hour and a half early.

“At about 1:50 p.m., they opened the doors and began to fill seats,” remembered Lynch. “Although the committee hearing rooms are able to fit a large number of people, only 40 interns were allowed in because many of the seats were reserved for staffers and the press.”

When she was only five people away from making it in, the doors shut and the hearing began.

“It was time for me to decide whether or not I should stay in line in case a seat opened up or go back to the office” said Lynch.

She had already been standing in line for an hour and a half, but she decided that getting inside to witness this important hearing and to watch Hilary Clinton would be worth the wait. So, she waited hoping that maybe a seat would open. Alongside the other interns, she occupied her time checking email and keeping up to date on what was happening on her phone. Every time the door opened, she jumped in anticipation that her seat had opened, but it didn’t seem that it would happen.

The five people ahead of her eventually gave up, but in true Madeira form, she did not give in. And lucky for her, it paid off. At 3:45 p.m. she was let in the room. Lynch recalls the experience once inside the hearing:

I quickly found a seat about four rows behind the secretary. I had been to a hearing before, so I knew how it worked.

(For those who have not been to a hearing, here is how it works: the members of the Committee of Foreign Affairs sat in elevated seating, like in the lecture hall, facing a table where the witness(es) sit, in this case Secretary of State, Hillary Clinton. Then the witness makes an opening statement, and each representative is allowed a certain amount of time to do a Q&A with the witness. The audience, so to speak, sits behind the witness facing the representatives.)

What made this hearing different was simply the amount of people there. Every seat for a representative was filled, as well as all the audience seats. The press lined each side wall with all their equipment, and photographers knelt by the witness table to get close-ups. The Secretary's back was to me, but I saw her profile occasionally and I watched the screens on the side walls which showed what the cameras were recording. The representatives questions varied, but were all along the lines of: Why did it happen; what could have been done to prevent it; what can be done in the future to prevent similar events from happening.

Some were kind and non-confrontational, and others were harsh and very confronting. One representative even brought pictures with him to illustrate his point about a growing terrorist movement. It was a very intimidating situation, but Hillary Clinton handled each question professionally and provided very matter-of-fact answers.

No matter what your politics, I believe we can all agree that Hillary Clinton is tough as nails.

Tory Lynch stayed as long as she could. She left at 4:25 p.m. to rush back to the office to be out of the building by 4:30 p.m. Riding the bus home, she recalls reeling from the experience, “It took me a while to comprehend the fact that I had just been 15 feet from Hillary Clinton during one of her last obligations as secretary of state.”