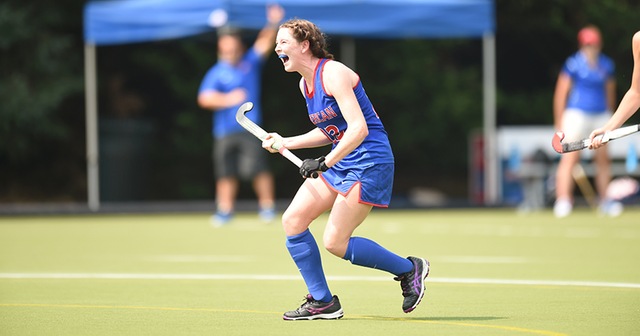 Natalie Konerth '13 of Huntingtown, Maryland, will trade her red, white, and blue jersey at American University for the red, white, and blue jersey of the United States, as she has been selected for the 2017 United States Women's National Development Squad. A current senior at American, Konerth garnered multiple accolades during her tenure, including multiple All-Mid-Atlantic Region honors, First-Team All-Patriot League selection, NFHCA National Division I Academic Squad, NFHCA National Division I Scholar of Distinction honors, ECAC All-Star honors, Academic Patriot League honors, and was named the Patriot League Scholar-Athlete of the Year.

While at The Madeira School, Konerth was named the 2012 captain of the Field Hockey team. She went on to become a 2011 and 2012 All-Independent School League Honoree, and led Madeira in goals and assists every season as a Snail. She also earned a gold (2011) and bronze (2012) medal at the Disney Field Hockey Showcase. In her senior year, Natalie was selected as the 2012-2013 Madeira Athlete of the Year. Her sister, Kita Konerth '16, was also a Madeira Snail, and followed in her sister's footsteps to compete at the collegiate level at the University of Connecticut last fall.

As noted in the American University release, Head Coach Steve Jennings stated, "We are thrilled for Pip that she has been named to the US Women's National Developmental Squad. The squad is comprised of outstanding players, and it is a fantastic honor for her to be included. This success did not come overnight, it recognizes years and years of hard work, focus and passion – we couldn't be prouder of Pip. Her love of the sport has led her on an amazing journey so far and we can't wait to see where this new opportunity leads."