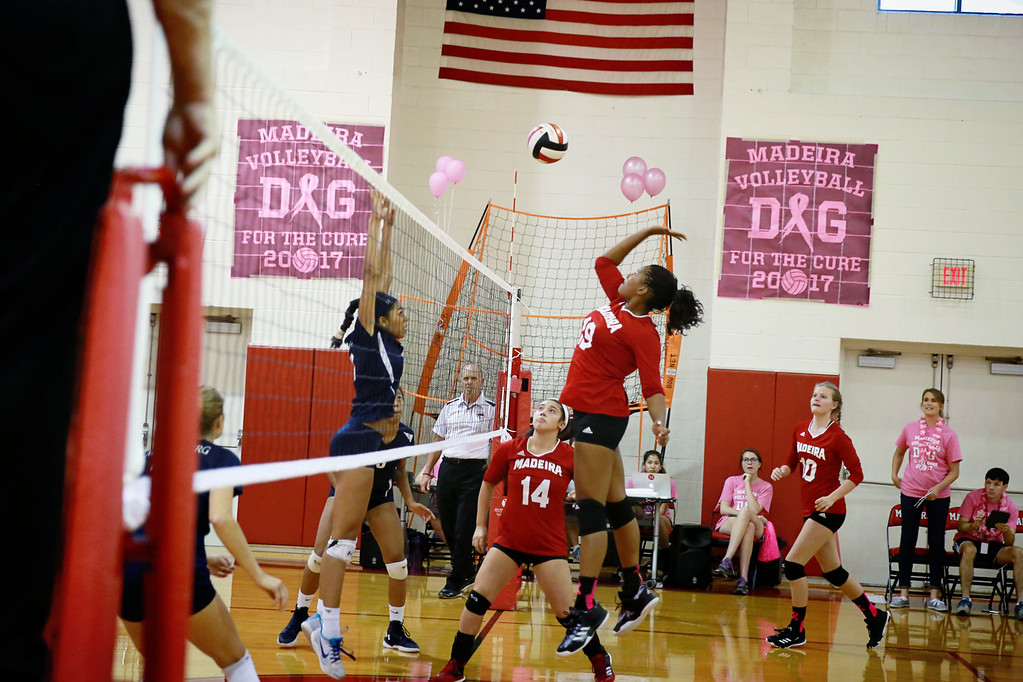 The Madeira School volleyball program hosted its third annual Dig Pink match in partnership with the Side-Out Foundation on Friday, October 6, 2017. The match was held as a part of the Madeira Family Weekend schedule, with the Junior Varsity team hosting an inner-squad scrimmage followed by the Varsity team's matchup against Middleburg Academy.  This year, Madeira Volleyball raised $4,384.45 for the fight against breast cancer.

The Dig Pink Rally is held every October and brings together volleyball players across the nation to raise funds for breast cancer research, demonstrate the power of teamwork, and show support for people with the disease. All funds raised through the Madeira Dig Pink campaign will go to directly benefit Side-Out’s game-changing cancer research and programs.

Senior Captain, Catherine Daly of Alexandria Virginia, said, "Dig Pink is a wonderful event that not only provides education to the community, but unifies us for one night in spirit and support. I love participating in Dig Pink as a volleyball player because I not only get to have a fun night playing on the court and being with my team, but it is my opportunity as an athlete to reach out to the larger Madeira community and give back. Dig Pink is a wonderful tradition and I look forward to coming back to many more!"

"I am so proud of the way that our players, parents, and community have championed this worthy cause over the last three years," said Head Coach, Kelly Picardi. "I am truly grateful to be a part of such a wonderful program that supports the fight against breast cancer and gives back to others in need. It's amazing to see our athletes contribute to building a tradition of excellence both on and off the court, working hard to be both great players and great people."