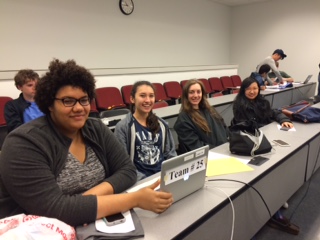 The University of Maryland High School Programming Contest brings talented students from high schools throughout the DC metropolitan area to campus to participate in a three hour competition. Contestants are tested on their Java programming skills and problem solving abilities. Each high school is allowed to send one team of four contestants; contestants must be enrolled in that high school. The students have one computer to solve as many problems as possible in three hours.

The team was made up of Sierra Giles '17, Chioma Anomnachi '17, Cindy Bai '16, and Isabel Ruffin ’16. This is the second year that The Madeira School has entered the contest and was the only all-female team entered. Improving from last year’s performance, the team solved the first problem in only nine minutes.

Several team members participated in the Computer Programming Team D Block activity to help prepare for the contest and met on Saturdays to learn to work together as a team and come up with a problem solving strategy. Junior team members Chioma and Sierra  look forward to competing next year.