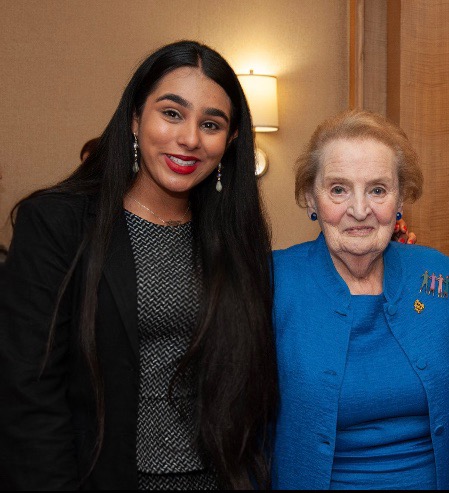 “My name is Tarina Ahuja. I’m 16 and I want to be President of the United States,” began Tarina’s speech, where she was the only student speaker at the 2019 Madeleine Albright Luncheon, “Celebrating Risk-Takers for Women’s Empowerment.”

Tarina Ahuja ’20 joined an impressive group of powerful women who also spoke at the event, including journalist Jill Filipovic, Representative Debra Haaland, Representative Abigail Spanberger, Representative Lauren Underwood, Vice Prime Minister of Ukraine for European and Euro-Atlantic Integration Ivanna Klympush-Tsintsadze, and ‘Me Too’ Movement Founder Tarana J. Burke, who was the recipient of the Madeleine K. Albright Grant. Speaking in front of these remarkable leaders can be daunting, but Tarina handled it with aplomb.

“The entirety of my speech felt like such a surreal moment. I have always loved public speaking, and this speech was by far the most important one I have ever given. I made eye contact with the other speakers while I spoke, which was such a powerful moment for me because they were reciprocating, smiling back at me. It was special and something I will remember forever.”

Tarina structured her speech to reflect the themes celebrated at the event. “My speech was about what it means to be a young person taking risks and how the risks of other women have paved the way for my generation. Secretary Albright and Representative Spanberger, for instance, have taken risks to allow my generation to follow in their footsteps. They are the ones that have passed the baton and we are grateful for it.”

In noting how Tarina was selected to be the student speaker, Susannah Wellford, President of Running Start, a nonprofit organization devoted to preparing young women to enter run for public office explains: “Tarina was a standout student at Running Start’s high school program this past summer. I immediately thought of her when the National Democratic Institute (NDI) reached out to us about having a Running Start young woman speak at the luncheon. Tarina exemplifies what Running Start stands for:  she is confident, passionate about creating change, and is already a powerful voice for her generation. We are very proud of her!"

Tarina’s speech can be viewed on YouTube. The transcript can also be viewed here.

Tarina is also the recent Madeira PINK Award recipient for an application that she is developing to encourage and help young people advocate for issues they’re passionate about.

“Our world is yearning for new voices," proclaimed Tarina. "Voices of women who are fearless, change-oriented, have an ideal outlook of what the world could be. I and women in general belong in politics and our voices matter.”