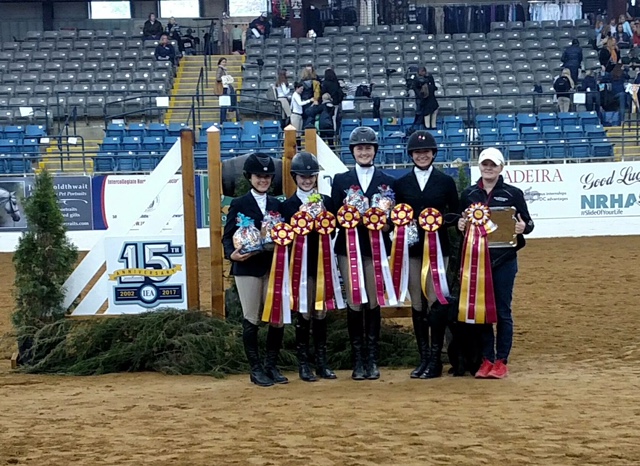 In late April, five Madeira riders traveled to the Interscholastic Equestrian Association (IEA) National Finals at the Virginia Horse Center in Lexington, Virginia, where they competed against the top 22 teams in the country to earn Reserve Champion High School team.

Drawing from the nation's leading middle and high school students, riders competed in a variety of different classes over the three-day championship held at Virginia Horse Center in Lexington, VA.Nearly 400 of the nation's leading middle and high school equestrians competed in the Waldron Arena within the Anderson Coliseum. The finalists represented 82 teams from a total of 11,167 eligible hunt seat student-riders. Individuals and teams participated in multiple competitions during regular season shows, regional finals and zone finals to qualify for the National Finals competition.

The weekend started with Ava Brugger ‘19 competing in the Individual Intermediate flat and Bridget Vaughey '19 in the individual Novice flat. Both riders handled the pressure of a national competition with grace and had personal victories.

On Saturday the team jumping classes were held. Jacey Albaugh ‘18 competed in the Open Over Fences, Ally Edwards ‘18 in the Intermediate Over Fences, and Bridget Vaughey in the Novice Over Fences. All three riders put in solid performances, with Jacey finishing in 7th place. Coach Leonardi was proud of the improvements all three riders made over their performances from last year.

Sunday’s competition included the team flat classes.  Jacey Albaugh, Bridget Vaughey, and Mikayla Connolly ‘20 all made it through the initial flat heats into the final round where the top 8 riders competed for ribbons.

First to ride was Mikayla Connolly in the Beginner Walk Trot Canter class. She finished third in her first ever nationals competition. Next up was Bridget Vaughey, who had a spectacular ride and finished first in the Team Novice Flat class. Last to compete was Jacey Albaugh, who rode to a second place finish in the Team Open Flat class, securing a second place finish for the team!

Coach Leonardi said “I was proud of each of the rider’s personal accomplishments this weekend, as well as how well they worked as a team to support and cheer on one another. They all controlled their nerves in a high pressure situation, and rode with poise and determination each time they stepped into the ring. Even when they didn’t get a ribbon, each rider was able to see the positive aspects of their ride and build on that to compete even better later in the weekend. There were quite a few college coaches present, and I was approached and complimented throughout the weekend about the quality of the Madeira riders. Finishing second in the nation was a terrific way to end what was an incredible season, and is a testament to the hard work these riders have put in all school year.”

Congratulations to the team on a great year!