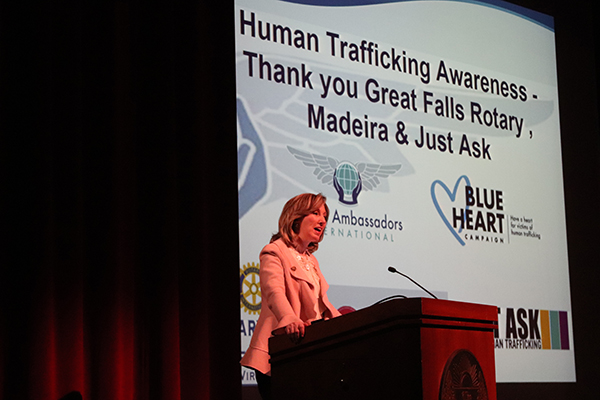 Madeira hosted a human trafficking awareness seminar on November 9, 2017, partnering with the Great Falls Rotary Club and Airline Ambassadors International to provide an informative and powerful discussion about human trafficking and its unfortunate local ties.

Representative Barbara Comstock and Fairfax County Supervisor John Foust were both in attendance, lending legislative might to the problem.

Skye Jannery Barney ‘18, who has been involved in raising awareness of the problems of human trafficking, helped organize the event from the Madeira side and introduced Representative Comstock.

Representative Comstock discussed how the proliferation of human trafficking is affecting the entire country and what methods she is using in Congress to help.

Nancy Rivard from Airline Ambassadors gave an overview of the methods used by perpetrators of human trafficking. She discussed how human traffickers use commercial airlines to commit crimes and often hide in plain sight.

Alicia Kozakeiwicz, also from Airline Ambassadors, gave some more details on how profitable life can be as a human trafficker. Traffickers can make up to $100,000 per victim in a business that has an estimated value of over $150 billion. She also gave a painful and haunting story about her own experience being trafficked to Herndon, Virginia when she was a teenager. Because of her own experiences and her desire to help other victims, Alicia founded The Alicia Project to promote Internet and child safety awareness and to fight human trafficking.

Barbara Amaya and Bill Woolf discussed the toll that human trafficking takes on victims and communities. Bill is a former detective in Fairfax County and has extensive experience fighting human trafficking. Barbara has first-hand experience of being a victim, having been trafficked to New York City as a teenager.

Amaya wants the public to know that human trafficking is a problem for everyone, not only specific communities. She comes from an affluent town and was lured away by an Internet predator.

She and Bill also discussed some of the ways in which the public can help end this horrific problem. One simple yet overlooked strategy is to ask questions if you encounter anything suspicious. There was a human trafficking case where a young girl was taken and put into school by her traffickers. Despite going to school every day, not one person asked her if she was in trouble or if she needed help. She was programmed by her traffickers not to be proactive and seek help, but could have endured less trauma had an adult taken her aside and asked her.

The four panelists answered questions from the audience after the presentations. Bill told a heartbreaking story of a girl from McLean, VA who was lured away by gang members. Despite attempts at cutting off contact with them, her family member’s lives were threatened and she was kidnapped twice. Her experience is another example of human trafficking being blind when it comes to who the victims are and where they come from.

If you would like to read further about this often-overlooked problem, please visit the following links: