Madeira film students on the set of "Jay Dates" 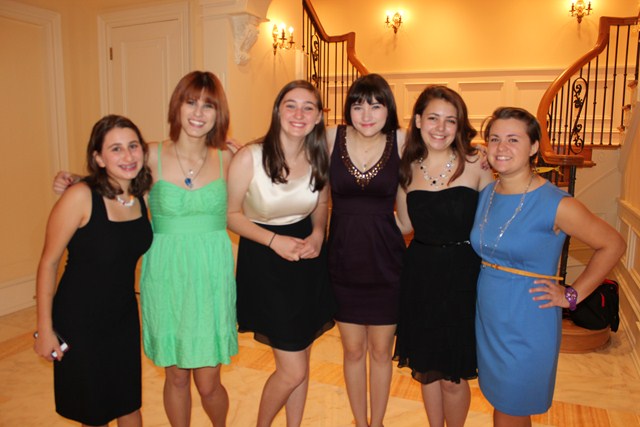 Saturday, September 22, six Madeira girls got up early to trade in sleep for a chance to be in a movie. I met up with Alison Branitsky, Julia Berley, Rose McAvoy, Kelleen Moriarty, and Devan Smith-Brown at 9:00 a.m. sharp at a mansion in Potomac, MD. We were there to be extras in a new short film called “Jay Dates” about a young man named Jay who needs a date to his brother’s wedding. His brother sets him up for the Jewish dating website J-Dates, where he meets Rebecca and falls in love. The only problem? He’s Roman Catholic.

The six of us arrived for the final scene of the movie, the wedding reception, along with 95 other eager guests. We were all wondering how 100 people were going to fit into someone’s house, but our fears were soon dispelled when we walked into the basement, which was bigger than all of our houses combined. We signed in, grabbed a bagel and some orange juice, and chatted, waiting until all of the stars were done with hair and makeup. In the meantime, an old friend joined us. As it turns out, Jay’s brother’s fiancé was played by no other than Melissa Berkowitz ’09. She sat down in her wedding dress and told us about the movie, how the day was going to go, and, most importantly, life after Madeira.

Afterwards we were greeted by the director and assistant director of the film. As it turns out, Rose had worked on another film with the director, and she recognized her. In need of another bridesmaid, the director recruited Rose, who was promoted from an extra to a bridesmaid, given a new dress, and taken off to hair and makeup. Soon after, we were escorted into the banquet hall, shown to our table, and told to wait for further instructions.

Seeing that we were all young, fit women, the director came over to ask us if we wanted to be dancing in the background of the shot. Of course, we jumped at the opportunity to be closer to the camera. After about ten takes of dancing silently to no music in heels and tight dresses, we were all ready to sit down and give up the spotlight. By this time it was about 1:00 p.m., so we broke for lunch and had a pizza party.

After lunch it was back to the wedding, where we did 14, that’s right, FOURTEEN, takes of us walking back and forth from the dance floor to our table. From then on, it was mostly sitting at our table reacting to the actor’s lines, so we got a nice break. We got to witness the camera on rolling tracks, the hava nagila (the traditional Jewish dance done at weddings and celebrations), and all the improv that really goes on behind the scenes, although we did not get to do a marker (the slate that they snap shut at the beginning of the take). By the time 7:00 p.m. rolled around, we were ready for dinner. As it turns out, the extras were no longer needed until 9:00 p.m. as originally thought, so we were let go early, a nice surprise ending to a wonderful day.

All in all, it was a great experience. The cast and crew were so friendly, down-to-earth, and approachable. At one point I found myself lounging with the producer’s father (also the writer) and the star of the movie doing a crossword puzzle! Everyone was helpful and encouraging, and we all had a great time. Rose even got to go back the next day to continue her adventures as a bridesmaid! Don’t forget to watch Jay Dates!