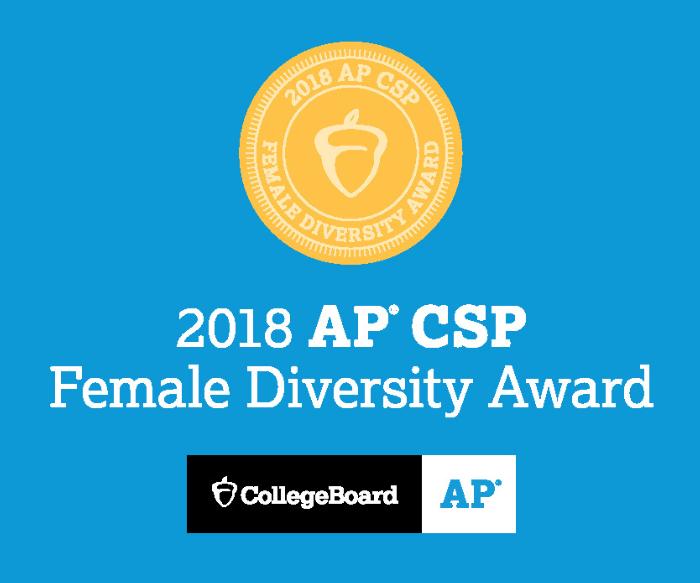 “We’re honored by this recognition and are proud of the achievements of our computer science students,” said Head of School, Pilar Cabeza de Vaca. “Madeira has offered AP Computer Science for the past 22 years, and our alumnae include numerous senior management STEAM professionals.”

“Madeira has given me a strong foundation in STEAM and increased my knowledge about computer science. The personal development I experienced in an all-girls environment helped me feel really confident in going beyond my school community,” Painter noted. “After my Co-Curriculum internship at Johns Hopkins, it is exhilarating to say that I improved ship navigation security. It was also a little scary because I was able to figure out how to hack into the system.”

Providing female students with access to computer science courses contributes to gender parity in the industry’s high-paying jobs and drives innovation, creativity, and competition. According to UNESCO’s Institute of Statistics data, less than 30% of the world’s researchers are women; in North America and Western Europe, it’s just 32%.

Research shows women are more likely to pursue computer science if they’re given the opportunity to explore it in high school. In addition to Co-Curriculum internships, Madeira recently offered a STEAM leadership trip to Silicon Valley to connect students with alumnae and other female executives in an array of the country’s leading technology companies, from startups to innovation leaders, like Google, Pixar, and Oracle. Students were personally guided and mentored by Madeira engineers, animators, marketing professionals, designers, producers, and other inspiring women, who offered workshops and shared career advice. Networking and interning with female mentors in STEAM fields provides young women with invaluable direction.

“By inviting so many young women to advanced computer science classrooms, Madeira has taken a significant step toward preparing its students for the widest range of 21st-century opportunities,” said Trevor Packer, College Board senior vice president of the AP Program. “We hope this inspires many other high schools to engage more female students in AP Computer Science and prepare them to drive innovation.”

Madeira is proud to be among the top AP Computer Science programs worldwide in providing inspiring opportunities for young women.