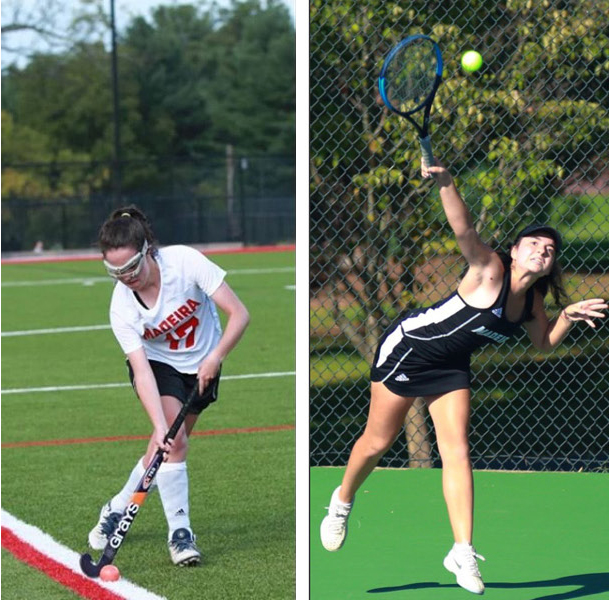 Trudy Painter ’19 and Liya Savasman ’20 were selected for the All Independent School League (ISL) A Division team while Sophia Bernstein '19 and Lauren Grohowski '19 received honorable mention honors for their respective sports. The All ISL team is selected by the varsity coaches within the league and confirmed by the ISL Athletic Directors.

Trudy Painter, a senior day student from Vienna, Virginia was selected for the All ISL A Division Field Hockey team concluding the 2018 season. Trudy provided the Snails with high energy and tenacity that lead Madeira to five wins, the most wins varsity field hockey has experienced in over three years. "This was the most skilled Madeira Field Hockey team I've been a part of, and I was so proud to see how much my team grew over the years," says Trudy. "My favorite memory of the season was coming back to upset Bullis 2-1."

“Trudy was an absolute Rockstar,” said Assistant Coach, Kelly Chandler. “She pushed her limits everyday as a leader and as a result made everyone else around her push theirs. She was our voice and spark on the field. Her effort and commitment to this team over the last four years was a major factor in  the teams historical success this season.”

Liya, a junior day student from McLean, Virginia was selected for the All ISL A Division Tennis team after a solid 2018 season. Liya played #1 Singles for the Snails, and helped lead varsity tennis to six victories overall and a ISL Semi-Finals appears against Bullis. Liya reflected on the season by saying, “The support and encouragement of each other on the team, brought us closer and made us better at the sport we love.”

Head Coach, Chris Moulin remembers the season by saying, “The varsity tennis team came together working hard everyday and it was great to see the success of our team progressing to the ISL Tennis Semi-Finals. This is why we put in all the work throughout the year so we are ready to preform at the highest level in the ISL Tournament.”