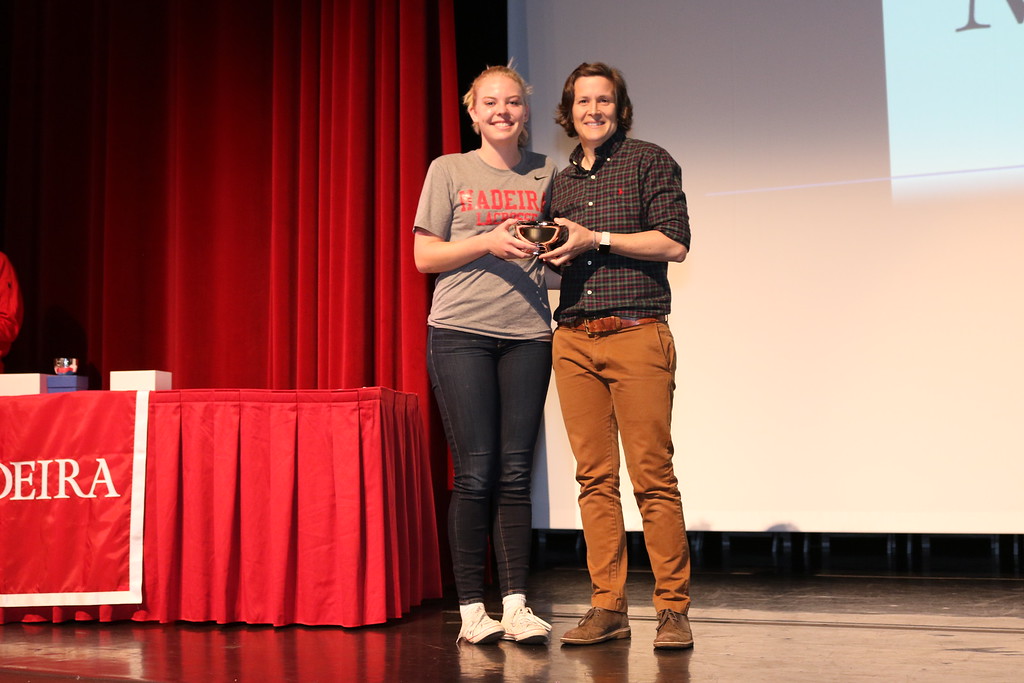 Madeira Athletics held their annual Spring Athletics Assembly in the Chapel Auditorium on Friday, May 26, 2017. At the assembly, Athletic Director, Katie LaRue presented five annual athletic awards and the Most Varsity Letters Award, a new addition for the 2016-2017 school year. The winner of the Red White year-long spirit competition was also announced at the assembly by the Red White captains.

The Geff Fisher Award was presented to junior squash athlete and day student, Arabella Valcourt, of McLean, Virginia. The award is chosen by the squash coaches, and honors the player who has given the most back to the game of squash during their time at Madeira.

The Dorothy Lee Hayden award is given in honor of Dr. Dorothy Lee Hayden, former Madeira teacher, coach, college counselor, and Director of Athletics and Physical Education. Dr. Hayden retired after 33 years at Madeira, and was inducted into the inaugural class of the Madeira Athletic Hall of Fame in 2015. Upon Dr. Hayden’s retirement, Madeira Athletics created the Dorothy Lee Hayden Award to honor her legacy. The award is presented annually to a junior varsity athlete who has demonstrated loyalty to Madeira Athletics as a participant and supporter, has shown dedication to improving her core skills in her respective sports, has exhibited growth as a leader due to her personal efforts and commitment to her teammates, and has an overall appreciation for sports due to the pure enjoyment that athletic participation brings. This year's Dorothy Lee Hayden Award was presented to junior boarder, Margaret Needler, of Rockville, Maryland.

Claire Simpson also received a new award that was added this year by the athletic department. With 11 varsity letters over 12 seasons, Claire was presented the Most Varsity Letters Award for earning the most varsity letters during her tenure at The Madeira School.

Red White captains and seniors, Hannah Adams, Morgan Wallace, Jenna Shackelford, and Skylar Meyers announced the winner of the annual Red White spirit competition. For the first time in several years, the Red Team was victorious in the year-long competition. The Red Team banner will hang above the mantle in the dinning hall throughout the 2017-2018 school year.

Congratulations to all of our recipients and the Red Team on a job well done!

See all of the pictures from the Spring Athletics Assembly here!