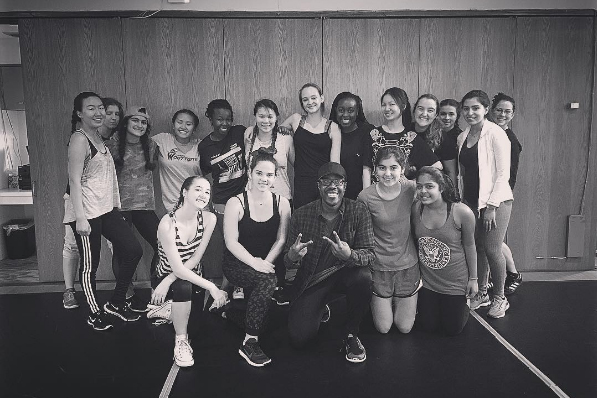 After several impressive performances at SpringFest, The Madeira Dance program kept their training going with guest instruction by Victor Adebusola, a locally trained dancer and choreographer.

Adebusola is a full time choreographer, dancer and instructor and most recently was the Chief Artistic Director of Culture Shock DC. He is an adjunct faculty member at George Mason University, teaching beginner and intermediate Hip-Hop courses. He also was recently brought on as faculty for Platinum National Dance Competition as convention instructor and judge. Adebusola has had works showcased at the John F. Kennedy Center of Performing Arts in Washington, D.C. Vic has also choreographed several award-winning competition pieces for dance studios in the Maryland, Virginia and DC area.

Adebusola started his dance career in 2002 in Baltimore, MD, where he trained in Ballet, Tap, Modern, Jazz and Hip Hop for several years. After graduating high school, he went to the University of Maryland College Park where he received his bachelor’s degree in Government and Politics and his master’s degree in Nonprofit Management and Leadership. While attending Maryland, he discovered an on campus based hip-hop team called Dynamic Hip-Hop Dance Troupe and eventually became Artistic Director of the group.

“We are doing incredible things, said Michelle Sarson, Director of Dance. “The girls have really come up.”