Introducing our new faculty and staff 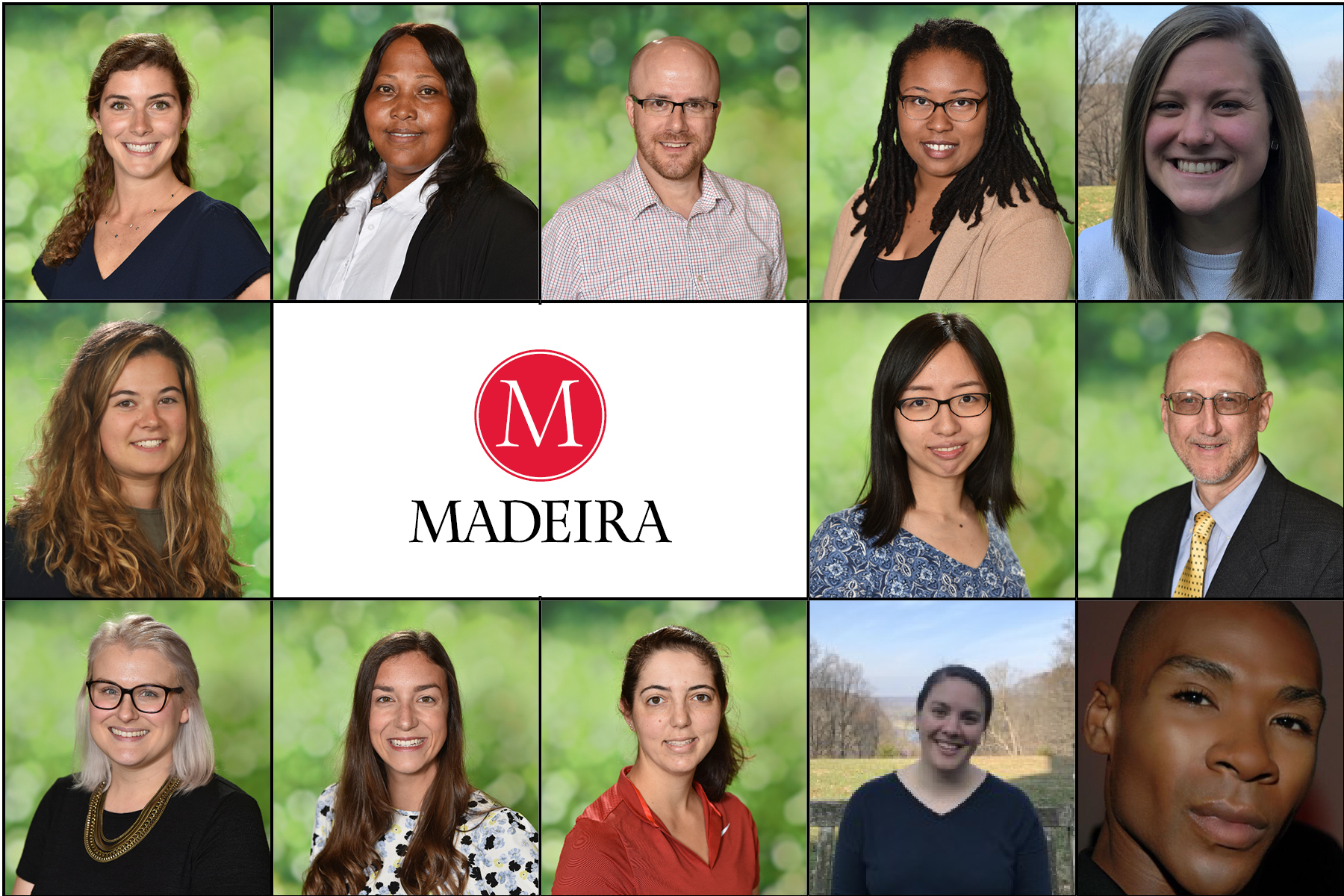 Madeira is pleased to welcome an impressive array of new faculty and staff members who have joined us this school year. We look forward to seeing their contributions in the classroom and around campus.

Mary Ann Broughton joins the Admissions Office as the Visit Coordinator. She comes to Madeira after graduating from The University of North Carolina at Chapel Hill with a degree in Political Science and Spanish. After graduation, Ms. Broughton worked in the Advancement Office at her alma mater, Episcopal High School, where she realized her passion for the boarding school environment. In her free time, Ms. Broughton enjoys yoga, making Pintxos (a delicious Basque food that she discovered while studying abroad in Bilbao, Spain) and being outdoors.

LaShawn Cook is our new Gift Entry and Acknowledgements Coordinator. She comes to us with a deep and broad knowledge of gift entry and a mastery of Raiser’s Edge, Madeira’s development database. Ms. Cook was with Friends of the National Zoo for over 20 years in Membership Relations and Customer Service, and moved on to become a Philanthropic Specialist at the COPD Foundation.

John Geoffrion, our Development Database Manager, comes to Madeira having worked for over a decade with the data that supports non-profit fundraising like the World Wildlife Fund, Massachusetts General Hospital and most recently the Humane Rescue Alliance. He also balanced a parallel career in the performing arts as an award-winning actor and director in theatres in/around Boston and DC. Don't start talking to him about obscure 60's music or Doctor Who unless you have a lot of time to spare.

Tasia Harris joins us as the Assistant Director of Co-Curriculum. Ms. Harris is a graduate of UNC at Chapel Hill and received her Master’s from Johns Hopkins University.  She has spent the past five years as a researcher in education and teaching, coming most recently from the Afya Public Charter School.  She will be working with Junior Citizenship Placements.

Aaron Jackson will be teaching Ballet to our talented dance team this year. Mr. Jackson received his formal training in New York City at the School of American Ballet, where he trained year-round and in summer intensive. While a full-time company member with The Washington Ballet, Jackson began his teaching career at The Washington School of Ballet’s Summer Intensive and the Jones/Haywood School of Dance. In 2006 he joined the summer faculty of Berrend Dance Centre/Olney Ballet Theatre. In 2010, Jackson joined the faculty at Berrend Dance Centre. Mr. Jackson has choreographed many short ballets for competitions and showcases, including Entropy for Berrend Dance Center students at the 2016 YAGP competition in Boston. His career also includes choreographic projects with The Washington Ballet Studio Company and The Washington Ballet Trainees. In addition, Jackson coaches dancers privately, including several who are dancing professionally or who have been accepted at prestigious ballet schools.

Paige Kerrigan joined the Summer Programs team as Assistant Director of Summer Programs last winter. She comes to Madeira with 15+ years’ experience working in the summer camp field. Previous to Madeira, Paige worked as the Camp Director and Assistant Principal at Chesterbrook Academy Elementary and Middle School in Sterling, Virginia. Paige is a Northern Virginia native who attended and worked as Program Director at Congressional Camp in Falls Church, Virginia. With her Bachelor’s in Integrated Language Arts Education from Ohio University and Master’s in Recreation Administration from Indiana University, she is excited to provide a high quality and enriching experience to all Summer at Madeira campers. Paige’s favorite part about summer camp is color wars, lip sync, and creating lifelong camp friendships. During the Winter, she is also the Junior Varsity Assistant Basketball Coach.

Emily Michelson, who joins the History Department and is a dorm parent and a coach, comes to Madeira from St. Mark’s School, from which she also graduated. Ms. Michelson has taught history at the Fay School and has been a member of the History & Social Sciences Faculty at St. Mark’s, where she also worked with auxiliary programs. Outside of history, Ms. Michelson has many interests and skills: she is a French speaker who participated in a school-year abroad during high school and a lover of field hockey and lacrosse. Her undergraduate degree is in International Relations and French from the University of St. Andrews.

Ellie Peaks joins Madeira as the Assistant Director of Co-Curriculum. She is a graduate of Clemson University and received her Master’s from Belmont University.  She has been a teacher for the past nine years and comes most recently from the National Presbyterian School.  She will be working with Senior Leadership Placements.

Sarah Merianos joined the Summer Programs team as Director of Summer Programs last winter. She comes to Madeira with 15 years' experience managing informal education programs. Previous to Madeira, Sarah was the Family Programs Manager at the National Building Museum, designing hands-on immersive programs for children and their families including family festivals, workshops, and summer camp. From 2006-2013 Sarah worked for Girl Scouts of Eastern Massachusetts and directed a residential and day camp program for the council. She holds a Master of Arts in Non-profit Management from Claremont Graduate University, and a Bachelor of Fine Arts in Education from Massachusetts College of Art and Design. Her favorite thing about summer camp is singing songs at the top of her lungs, tie-dye, kayaking, and getting to know all the campers.

Angela Pubal joins the Madeira School community as the Assistant Dean of Students for Campus Life. Previously, Ms. Pubal was the Marketing Manager at the American Association of Political Consultants for 3 years. She is the current Varsity Volleyball Coach and Program Manager at McLean High School, and coaches with Virginia Elite Volleyball Club during the high school off-season. Ms. Pubal graduated Summa Cum Laude in 3 years from West Virginia University with a Bachelor’s of Science in Psychology. She was selected as a Phi Beta Kappa member in her final year at WVU. In her free time, Ms. Pubal is an avid traveler and she loves to play volleyball.

Theresa Shattan is the Barn Manager and originally hails from Charlottesville. She comes to Madeira from the University of Findlay in Ohio, where she recently completed her Master of Arts in Education while working as a Teaching Assistant, in the University's renowned Equestrian Studies Program.  Ms. Shattan also has a Bachelor of Science in English Equestrian Studies from Findlay and was a member of their varsity IHSA team for four consecutive years.  Ms. Shattan brings a broad range of experience to Madeira, including internships at the Kent School in Connecticut and HS Sportpferde GmbH in Aachen, Germany

Yaran Sun joins the Math Department this year. For the past three years, she has been teaching math, coaching the math team, and serving as a dorm hall parent at Miss Hall’s School in Massachusetts. Ms. Sun has a Master’s in statistics from Columbia University and an undergraduate degree in mathematics from the University of Oregon. She also studied financial engineering at the University of Macau in China. She designed and initiated the first math team at Miss Hall’s. A native Chinese speaker, Ms. Sun will teach BC Calculus and a range of math courses, as well as facilitating Madeira’s math team.

John Tracey joins the Science Department as physics teacher and department chair. He comes to Madeira most recently from the Princeton International School of Mathematics and Science, and he has also taught and served as department chair at the The Knox School and taught at Ross School and public schools throughout New Jersey. At the Princeton International School, he taught a range of science courses, was a dorm parent, and facilitated a Bicycle Club for students. Before his teaching career, he was a system engineer and a systems support engineer at various tech companies. Mr. Tracey holds a Master’s degree in education technology from New Jersey City University and an undergraduate degree in Physics from Seton Hall University.

Andrew Sharp is our new Director of Co-Curriculum and is working with Sophomore Service Placements. He earned a Bachelor's degree in Political Science and English from Connecticut College and a Master's degree in International Politics from The George Washington University. Before becoming Director of Co-Curriculum, he served as head of the History Department, was assistant academic dean, and taught history. He will still teach some history classes.

Sarah Yarborough '09, who has been the Assistant Dean of Students for Campus Life for the past two years and is a Chaucer and Shakespeare expert and an English teacher, returned to the classroom this fall. Her undergraduate degree from Smith College is in English and Theater. During college Ms. Yarborough was awarded a prize for a commendation in Chaucer studies and she studied abroad at Trinity College, University of Oxford; Oxford, England (2011). University of Edinburgh; Edinburgh, Scotland (2012). She has taught English and drama at Branksome Hall Asia in South Korea, using the IB MYP curriculum. Her love for literature was stoked in the Madeira English classrooms. Ms. Yarborough is a tenth-grade advisor and will continue as one of the rock-climbing coaches.