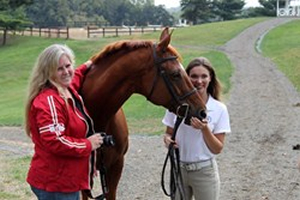 Hanna Powers ’15, this year’s Youth Ambassador for the Washington International Horse Show, will be featured in the Washington Post in the Kids Post section on the October 23. Reporter Kitson Jazynka interviewed Hanna on September 28 and held a photo shoot at the Madeira stables.