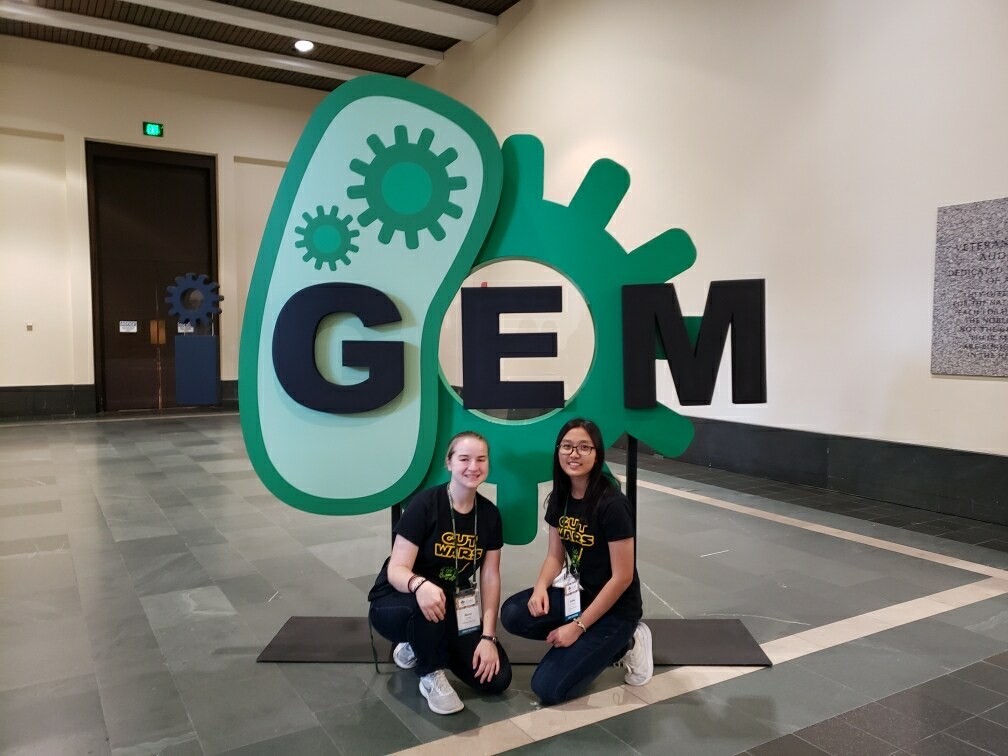 Seniors Hailey Ho and Maria Lyons have spent the past six months participating in the International Genetically Engineered Machine (iGEM) competition, a premiere student competition in synthetic biology. Student teams are given a kit of biological parts and work to build and test biological systems in living cells, ranging from bacteria to mammalian cells.

“I’d always viewed genetic engineering as something sinister, that could only be performed by highly trained scientists in mysterious laboratories, said Maria. “It turned out that isn’t the case at all; the procedures can be done by anyone, even high schoolers! Genetically engineered organisms can have all kinds of benefits: iGEM teams created projects that could fight disease, manufacture drugs, and clean up the environment, to name just a few.”

After finding out about the competition at a workshop at the Baltimore Underground Science Space (BUGSS), Maria recruited classmate Hailey to join the Baltimore team.

“Coming to iGEM, I was excited to gain some research experience and apply what I learned in school to address real-world problems,” said Hailey. “Six months with the BioCrew was a roller coaster. Sometimes, we would go for weeks without much progress and, all of a sudden, good news just flooded in!”

After months of work, the team, The Baltimore_BioCrew, traveled the Boston to present their project and compete for medals at the 2019 iGEM Giant Jamboree. Their impressive project engineered bacteria to repopulate the microbiome after antibiotic treatment and fortify the gut against bacterial disease. Their efforts earned them a Gold Award.

“My favorite part was going to Jamboree in Boston, said Maria.  “We’d spent so long working on this project, and I was very proud to show off what we’d accomplished. It helped me get more comfortable onstage, and I learned a lot from the judges and the other teams. We were able to see a lot of other teams’ presentations, and we got some really good ideas for next year!”

The iGEM Foundation is an independent, non-profit organization dedicated to education and competition, the advancement of synthetic biology, and the development of an open community and collaboration.