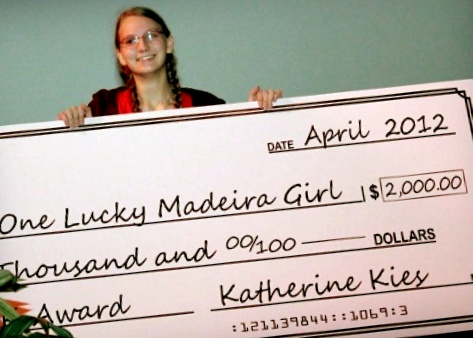 Dayna has been writing and storytelling since a very young age. She plans on using the PINK Award to extend her creative process and have an editor review and prepare her 300 page novel for publication. Compelling pleas and comments are a part of any application, and Dayna was able to compel the judges with her video application in which she stated, “Some applicants may want to use this grant to get something started, but I need this grant to get something finished.”
The PINK Award was established by Katherine Kies ‘07. Upon graduating from Madeira in 2007 she decided to pursue a career in the hospitality industry. She went to the Cornell School of Hotel Administration. She started her own catering business during her time at Madeira where she made special occasion cakes and prepared dinners for small groups. She continued her cooking career by working at DC Central Kitchen which provides cooking training and jobs for unemployed individuals. She had a co-curriculum placement at CityZen restaurant in the Washington, D.C. Mandarin Oriental Hotel. Since leaving Madeira and earning her degree at Cornell, Katherine has worked in a variety of kitchens and bakeries. She won the Drown Prize Award, the top honor at the Cornell School of Hotel Administration and has decided to give part of that award back to Madeira in appreciation for the co-curriculum experience that led her to her major and subsequently this award. And, she felt compelled to “pay it forward” to a deserving Madeira girl.