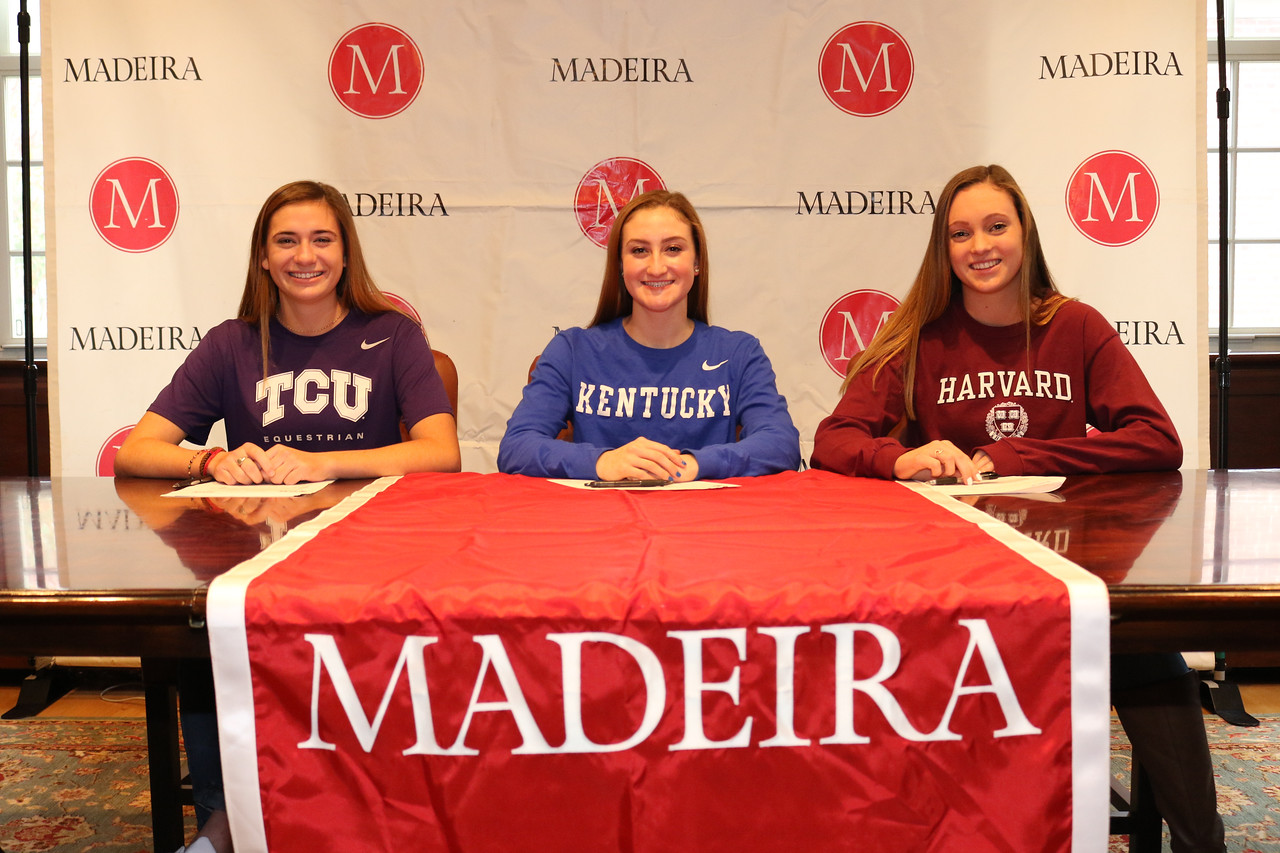 Madeira seniors Jacey Albaugh, Isabella Gati, and Maddie Heilbrun have announced their commitments to play athletics at the collegiate level next year. Albaugh will ride for the Texas Christian University Equestrian Team, Gati will swim for the University of Kentucky and Heilbrun will swim at Harvard University.

On November 8, family, friends, coaches and members of the Madeira community gathered to witness Albaugh, Gati and Heilbrun sign their national letters of intent (NLI). The National Letter of Intent (NLI) is the official document used to indicate a student athlete’s commitment to attend and play sports at a participating National Collegiate Athletic Association (NCAA) college or university in the United States.

Albaugh is a four year senior day student from McLean, Virginia and has been on the Varsity IEA (Interscholastic Equestrian Association) team for the last three years. She has served as team captain and was member of the National Finals team in 2016 and 2017. She helped the Madeira Equestrian team to an IEA seventh place national finish in 2016 and a Reserve National Championship Title in 2017. She has also helped the Madeira IEA team claim championship titles at their first four events this season. In addition to riding at Madeira, Albaugh has been competing up and down the east coast for the last ten years and currently trains at Code Four Show Stables with Guy and Tiffany Cambria.

Ian McCartney, Director of Equestrian Programs at Madeira, shared his excitement for Albaugh in saying, "Jacey is a supportive teammate and fierce competitor who has been an instrumental part of the IEA team’s success over the past few years. Her clutch performances in the post-season the last two years were key to the team finishing seventh in 2016 and second in 2017 at the National Finals. TCU is lucky to have her on their team, and I look forward to following her success in the future."

Gati is a three year senior boarder from El Dorado, Arkansas. She is a three year member of the Madeira Varsity Swim and Dive team. She has served as co-captain of the varsity swim team and is a co-captain of the Red Team, one of Madeira’s spirit teams. In addition to her dedication to athletics at Madeira, Gati is also a member of Nation’s Capital Swim Club, a year round swim program.

Heilbrun is a four year senior day student from Occoquan, Virginia. She is a four year member of the Madeira Varsity Swim and Dive team, and is one of the captains for the 2017-2018 season. Heilbrun also competes year-round outside of school with Nation's Capital Swim Club.

Gati and Heilbrun helped lead the Madeira Swim and Dive team to a perfect 9-0, dual-meet record and third place in the state last winter. Both swimmers finished first in the state as members of the 200 Freestyle relay and the 400 Freestyle Relay, and set a new team record with an All-American time in the 400 Freestyle Relay. Gati claimed an individual title in the 100 Butterfly race as well. Gati and Heilbrun were selected as members of the 2016-2017 All-State Swim Team, and were also named to the 2015-2016 USA Swimming Scholastic All-American Team. Gati and Heilbrun both helped Madeira win the 2016 Independent School League (ISL) Swim and Dive Championship, and both have received All-American accolades in every season at Madeira.

Madeira Head Swim Coach, Rod Montrie, stated, "It's rare for a program to have an athlete of this caliber, but we are fortunate enough to have two! Izzy and Maddie are both not only tremendous competitors with outstanding success in the pool, but they also are so much fun to coach and have been fantastic teammates and leaders. They have left their mark on our program, and I am excited to see how they represent Madeira swimming at the next level."

Congratulations to Jacey, Izzy, and Maddie on all of their accomplishments at Madeira, and best of luck at the next level!

To see more pictures of signing day for our college athletes, click here!