Charlotte Smith '17 spends summer out of this world 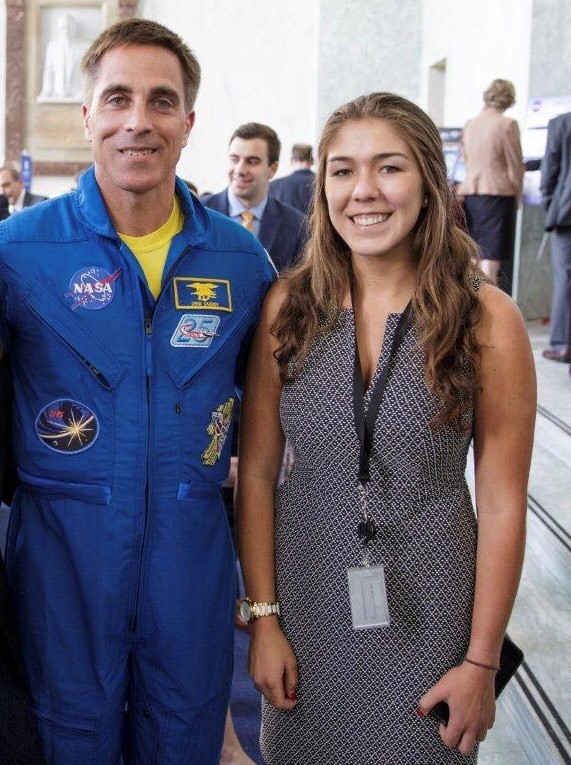 I spent the month after graduating doing an internship at the NASA headquarters in DC. I woke up every day at 6:30 a.m. to take an hour-long Metro ride to E Street in SW.

I reported to the Director of the Office of Communications, although I worked closely with the person who was in charge of astronaut appearances and publicity. I mostly worked on planning and creating post flight trips for the astronauts who are on the current mission on the international space station, who will be coming down in September.

Two of the astronauts will be coming to DC as a post flight trip a month after they’ve come back from space. I was deciding what they would be doing that week, other than their Capitol Hill day which involves a lot of lobbying and going around to see senators and congressional representatives.

This means that I looked into each of the astronaut’s history and background and found out what they were interested in and what connections might be possible while they were in DC. For example, one of the astronauts had been a baseball captain when he was at West Point and so I arranged for him to throw the first pitch at a Nationals game.

Just looking into the astronauts’ backgrounds was totally eye opening. I found out that one of the astronauts had put together a video of himself making the first peanut butter & jelly sandwich in space! I proposed that he re-make that PB&J at an event at the Air & Space Museum in DC with children, which would give him a chance to explain how gravity and being in space affects making something so simple as a PB&J. Not everything I proposed could always fit into their schedules.

A large majority of what I worked on was compiling press coverage and deciding which NASA headlines and events were recorded in which categories. A huge amount of effort went into announcing the astronaut candidates: this was a Level 1 priority for the communications department. On the other hand, smaller events that might only make regional news would more likely be a Level 4 priority.

I made PowerPoint presentations for most of the priority level 1 events that had already happened this year, including a slide for each event with the statistics of the outreach and how many people it reached. The data I collected would then be given to one of my supervisors who used it in one of his senior leadership end-of-fiscal-year reports.

I got to sit in on the senior leadership meeting for the communications department, which included hearing from people like the historians’ office. It was also quite fun because every time I got to report on what I was working on I felt like part of the team.

Every Wednesday all the interns at NASA HQ came together for brown bag lunches where each week someone different at NASA HQ would come in and talk to us, either about what they do or something they’ve worked on. For example, the NASA TV and history office people talked to us about when NASA worked with the movie Hidden Figures. We got to ask questions of the guy at NASA who worked specifically on the set each day to help with accuracy. When I was at the brown bag lunches I realized how lucky I was to be there, being the youngest intern at NASA HQ. Most of the other interns were grad students or college students attending schools like Harvard and Yale, studying aerospace engineering.

My Madeira Co-Curriculum internships, including senior year at Booz Allen Hamilton and junior year working with Congressman Mike Thompson gave me such great exposure to the workplace and interacting with adults. These Madeira experiences instilled great confidence so I felt well prepared for my NASA internship, even though I was working with people older than I was.

One of the things that will leave a deep impression in my mind from the experience at NASA was getting to see the control room, which is a very large conference room with a million tv's showing different angles of the International Space Station and other NASA-related events going on. When the President is involved in any launch or NASA event, he comes to this room. It’s a huge round table and at each seat is a microphone that directly connects to the people in space, and so when I visited I got to speak to one of the astronauts as they were preparing for bed even though it was only 10:00 in the morning for us. Now I get to say I’ve talked to someone in space.

Every day the food trucks would line up outside NASA. I was intrigued when people would race out to be first in line for Thai Thursdays, for example. My favorite was the Jamaican food truck which served delicious jerk chicken with pineapple Pico de Gallo.

Once you were in on the secret at NASA, you found out that the “cool kids” sat on the roof of NASA which looked out over the Capitol and had an amazing view of the Library of Congress.

I was beyond grateful for the two fantastic supervisors I had who took me under their wing while I was there. One of them taught me about the different levels of communication and public outreach. On my last day they threw me a surprise going-away party where one of them had made apple cake and a jellyroll. I will always treasure a picture frame they gave me with my name on it thanking me for all the hard work I’d done.

People have been asking me if this internship made me want to become an astronaut. The answer is no, but it definitely made me want to represent the astronauts and all the remarkable things they do every day.

Also, everyone immediately asks me if I met any astronauts. I did! I went to Tech Day on the Hill, organized by NASA. Astronauts, as well as different space tech companies, come to one of the Senate or House buildings and have an event where they demonstrate new technology or show past discoveries. This is where I got to meet an astronaut, who was a former Navy Seal. On that day I also got to do a virtual reality tour of the Mars 2020 wind tunnel.