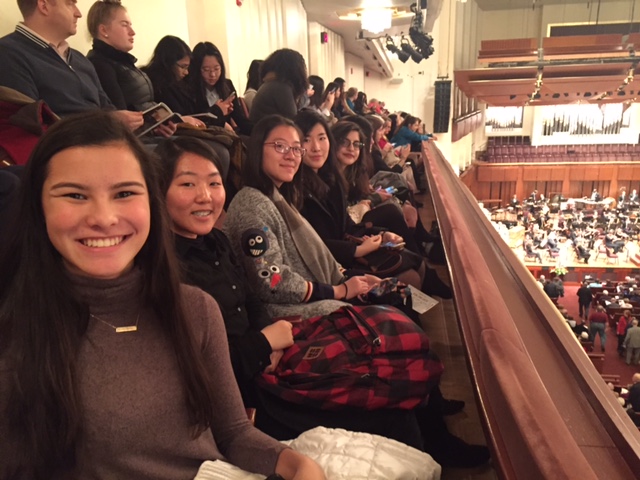 On Friday, January 13, the Madeira Chamber Orchestra went to the Kennedy Center for a tour, and a concert by the National Symphony Orchestra. Their tour included exhibits in the African and Russian Lounges which are adjacent to the opera house. The concert featured The Firebird by Stravinsky, Ravel's Piano Concerto for the Left Hand, and a piece by Rimsky- Korsakov, whose music is frequently performed by the Madeira Orchestra.

According to Ms. Khoo, Director of Chamber Orchestra, the students were all inspired by the NSO performance and  impressed by the Kennedy Center and its history.

“I always love going to the Kennedy Center, but this time was exceptionally special because I was able to see many parts of the building that I have never seen,” said Emily Cyrway '19, violin section leader. “I loved learning about the different rooms with items given as gifts by other countries after Kennedy's death, and was especially touched by the story of how he was the first president to pay attention to Africa. Not only was the tour amazing, but the performance was as well. I was stunned by Jeremy Denk's Piano Concerto for the Left Hand, and the ending of the Firebird left me in awe.”

Join us for the Chamber Orchestra Small Ensemble Soiree On February 7 at 7:00p.m.