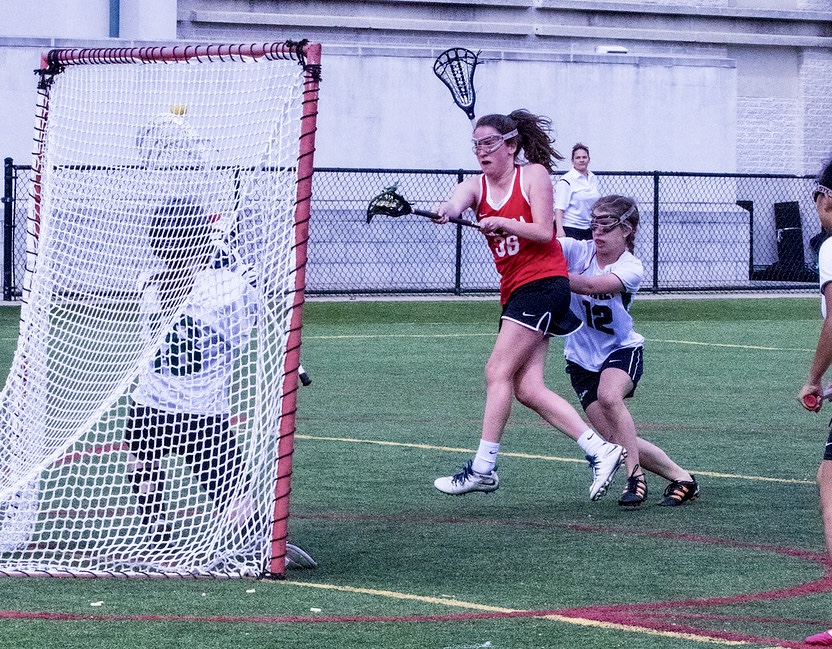 Madeira Varsity Lacrosse defeated The Maret School on April 5, 2017 at Maret. Madeira’s 14 goals were well distributed, with 7 different players finding a goal in the game. Trudy Painter ’19 led the offense with 5 goals, followed by Grace Frerichs ’20 in her Madeira Lacrosse debut with 3. Rounding out the scoring for the Snails were Morgan Wallace ’17 with two goals, and Catherine Luther ’17, Krysten Scott ’19, Annie Newton ’20 and Abby Stephenson ’17 all with one goal each. After 3 quick goals by Maret at the onset of the matchup, the Snails came back to lead 11-6 at halftime. Strong defense held Maret to just one goal in the second half, and Madeira's attack worked on possession and patience scoring 3, ending the game with the Snails ahead 14-7. Hannah Adams ’17 had a knockout game with 14 saves in goal. The Snails dominated on the draw with 14 draw controls distributed between Morgan Wallace ’17 (5), Claire Simpson ’17 (4) and Krysten Scott ’19 (4).

The Madeira JV Lacrosse team came away with the victory over Washington Latin in their home opener. Megan Grohowski ’19 and Sophia Phaltankar ’20 led the offense with 4 goals each, Grohowski with 7 additional assists. Stella Adler ’19 added three goals of her own, and Gabby  McClellan ’20 made many stops on defense and had one goal.

Madeira JV Lacrosse took on The Maret School Wednesday, April 5th, for their second game of the season. After being tied 3-3 at halftime, the Snails overtook the Frogs for a win of 11-5, bringing their record to 2-0 on the season.

Track and Field at Potomac Invitational 4/1

Track and Field at The Saints Track Classic 4/5

Madeira Varsity Softball started the season facing off against The Highland School in their home opener. Sam Sporn ‘18 threw 6 innings, and Ciara O’Donoghue ‘18 relieved and pitched 7th. All Madeira players were able to find playing time, including two freshmen. With a score of 14-2, the game was highlighted by a homerun by Catherine Hall ’18, and great defensive plays by Amani Hagmagid ’19 and Alexa Zartman-Ball ’17.

In their first regular season ISL game, varsity softball exhibited great teamwork, sportsmanship, and competitive drive against St. Stephen St. Agnes School. Though it was a loss of 5-6, the Snails never gave up. Captain, Alexa Zartman-Ball ’ 7, hit a homerun in the top of the 4th inning to tie the game at 3-3.  Starting pitcher, Sam Sporn ’18, threw a great game and her defense helped her earn a quick three up, three down in the bottom of the fourth. Hard work and perseverance paid off for the Snails in the top of the 7th with a two-run home run from Ciara O’Donoughue ‘18 to bring the Snails within one run, but SSSAS came through with the victory in the end.

JV softball hosted St. Stephen St. Agnes School in their home opener on April 4, 2017. Angela Zheng and Amy Yoo took the mound and pitched for the Snails.  Nisreen Marabe got on base with a hit, and Jordan Harrison stole first base on a dropped third strike. Although SSSAS came away with the win, the Snails fought hard and are taking momentum into their next game.