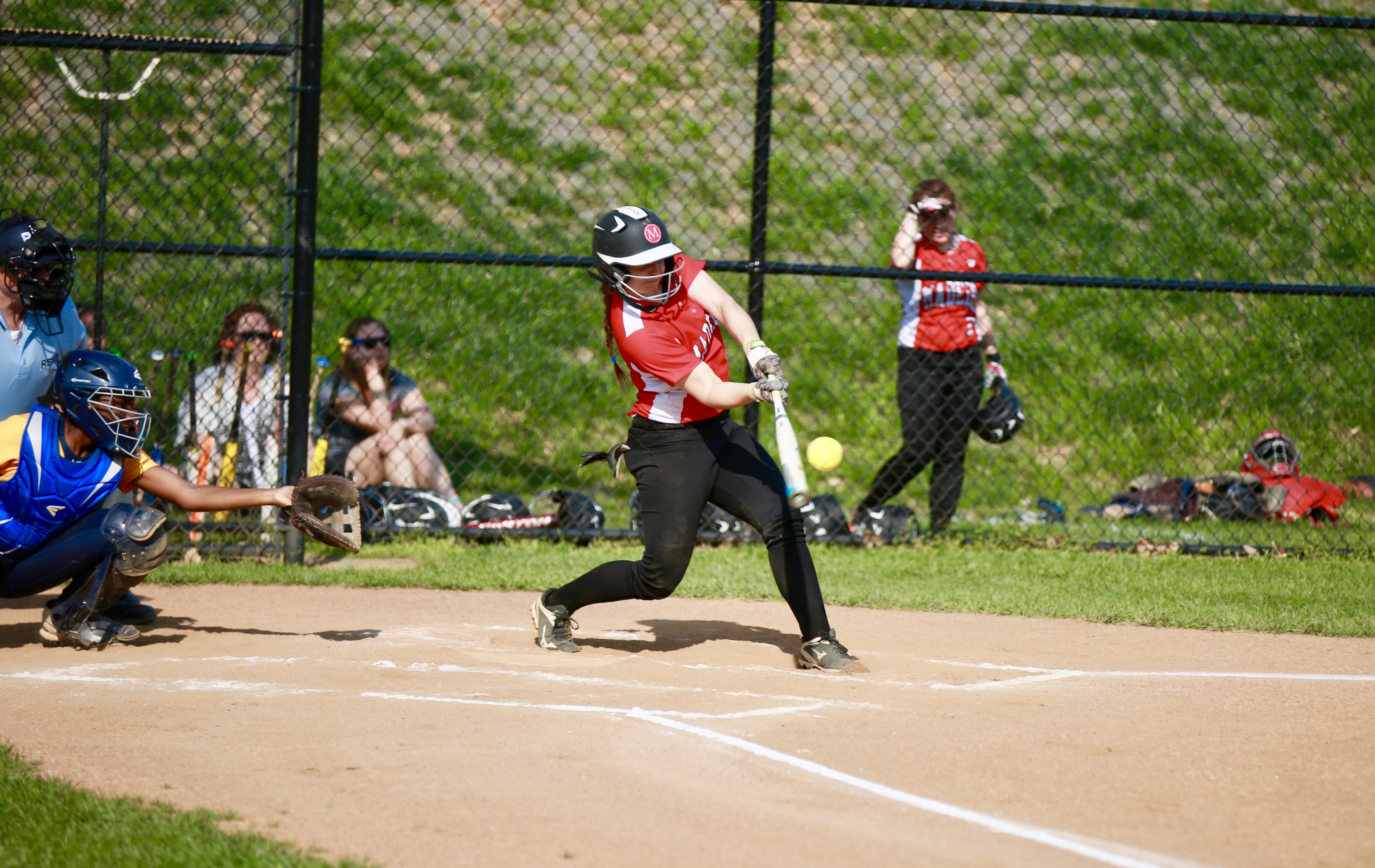 Track and Field at Holton-Arms Meet

The Madeira Varsity Softball team was led to victory behind the solid pitching of Sam Sporn (three innings) and Ciara O'Donoghue. The game was called short after 5 innings, and the Snails won the matchup with a score of 15-3 against Washington Latin.

The Snails started strong in the matchup against Bullis, holding them to a score of 5-8 through four innings. Strong at-bats from the opponent continued to challenge the Snails, but Madeira continued to handle the adversity by supporting each teammate. Bullis came out ahead in the end, winning 6-21.

Madeira began the first inning against GDS with 5 allowed runs in the field and no hits at the plate, finding their back against the wall with a score of 0-5. However, pitcher Sam Sporn found her groove on the mound, and only let up 4 additional hits in the next 7 innings. Alexa Zartman-Ball and Anna Sophia Massaro had control over the middle infield with multiple diving saves and double plays. Entering the bottom of the 8th inning, Giovi Moriarty stepped up to the plate with one out and runners at first and third. Moriarty found a crucial base hit, and with the fast running of Lyric Thornton from third to home, the Snails pulled ahead by one to claim the victory.

In the matchup against Holy Child, Ciara O'Donoghue pitched a fantastic game and had great support of her infield players behind her. Alexa Zartman-Ball led the offense for the Snails, hitting a grand slam, and Amani Hagmagid ended the game with a great catch in left field. Madeira came away with the win, scoring 18 runs to Holy Child's 3.

JV Softball had a marathon two and one-half inning game at Episcopal on April 7th. Ahead 16-9 at the end of the first inning, the Snails showed great promise as they worked together on the field. Angela Zheng brought a strong performance as pitcher, while Amara Eley made an phenomenal grab at short stop and had a strong presence at the plate. Although it ended in a loss, Madeira managed to score a total of 26 runs, with Episcopal finishing with 31.

The Madeira JV softball team hosted Episcopal at home on April 20th. Mary Fatih Everman made her catching debut for the Snails, and had a standout performance. Amara Eley and Jordan Harrison got on base with hits in the 4th inning, and proceeded to steal home for the Snails. Though Madeira made a great effort, Episcopal eventually won out with a score of 7-20.

Varsity Lacrosse defeated Sandy Springs 12-6 at home in a well-controlled matchup for the Snails. Trudy Painter '19 led the Snails with 4 goals, followed by Annie Newton '20 with 3. Rounding out our scoring was Sarah Hussain ’17, Jenna Shackelford ’17, Sarah Hughes ’18, Grace Frerichs ’20, and Krysten Scott ’19 all with one goal each. Hannah Adams ’17 had a stellar game with 12 saves, and Tatum O’Grady ’20 made her debut in net in the second half. Claire Simpson ’17 dominated the ground with a season high 8 ground balls.

Madeira bested Sidwell in a thrilling game at home with an overtime golden goal and a final score of 14-13. Entering the final minutes of the second half, Madeira allowed three goals for Sidwell. However, Krysten Scott ’19 had a vital draw control and found freshman, Annie Newton ’20, for a poised and powerful overtime winning goal. Newton ’20 led the Snails offense with 5 goals followed by Trudy Painter ’19 with 3. Rounding out our scoring was Jenna Shackelford ’17, Morgan Wallace ’17, Sarah Hughes ’18, Grace Frerichs ’20, Claire Simpson ’17, and Krysten Scott ’19 all with 1 goal each. Hannah Adams ’17 had 19 saves, and the Snails had a season high 17 ground balls, 7 of which were off of the draw.

Madeira Varsity Lacrosse came into their fourth game of the season to face a very strong Flint Hill team. Flint Hill scored 4 goals pretty quickly, and dominated the draw. The Madeira attack maintained possession and capitalized when they had the ball on their side of the field, successfully completing the team goal of maintaining long possessions and scoring off of team attack. Scorers included Annie Newton ’20 with 2, and Trudy Painter ’19, Sarah Hughes ’18, Grace Frerichs ’20, and Claire Simpson ’17 all with 1 each. Hannah Adams ’17 added 9 saves total on defense in the net. Claire Simpson ’17 had 6 ground balls, followed by Morgan Wallace ’17 with 4. Lily Rathbun ’20 made her varsity debut in goal in the second half.

Madeira lacrosse traveled to St. Andrew's in played in a well-balanced matchup against a good St. Andrew's team.  The scoring was even throughout the entire game for both sides, and scorers included Annie Newton '20, Jenna Shackelford ’17, Sarah Hughes ’18, Grace Frerichs ’20, Trudy Painter '19, and Krysten Scott ’19. Lily Rathbun got her first career start for the Snails in net and had a fantastic showing on defense.

The Madeira JV LAX Snails took on Sidwell Friends School, winning with a final score of 13-3. The Snails controlled the game by winning 10 of the center draws. Both goalies, Tatum O'Grady '20 and Lily Rathbun ’20, had outstanding performances in the matchup.

Madeira JV Lacrosse took on Flint Hill this past Tuesday at home. The Snails jumped out to an early lead, but the tough Flint Hill team rallied back to keep the score close. An intense match, Madeira finally finished on top, with a score of 9-8. The win for the Snails brings the JV Lacrosse program to a record of 4-0 on the season.

Madeira Varsity tennis won their match on Tuesday against Division AA Georgetown Visitation.  Emilija Platukyte led the team's victory with her 10-3 number one singles win, while Marina Akhavein had an impressive performance in her number two singles match. Reilly O'Flaherty followed in number three singles winning her match (10-6), and in number four singles, Bella Simmons showed great sportsmanship and played hard throughout her match. The doubles matches were dominant - with a beautiful performance from Aves Mocek and Lily Mackney (10-6) and Chloe Valcourt and Mary Watson playing number two doubles, winning their match (10-7). The number three doubles team of Jordan Kallett and Maggie Needler pulled out an impressive win (10-6).

Madeira Varsity tennis played hard at home against the Holton Arms School, current ISL Division AA Champions. Despite the loss, the team worked hard and were mentality tough throughout the match. Highlights included Emilija Platukyte's 8-0 victory and Mary Watson and Holly Crowley in the number two doubles match, finishing 7-9. Marina Akhavein, Reilly O'Flaherty, and Bella Simmons all showed tremendous effort in their singles matches, keeping the points in play and giving it their all. Aves Mocek and Lily Mackney, playing number one doubles, were very consistent throughout their match, showing promising potential for the season. Chloe Valcourt and Maggie Needler, in number three doubles, played together for the first time and showed impressive communication and execution. Sharon Ge and Jordan Kallett, in the number four doubles slot, played hard and kept a good attitude throughout.

Madeira Varsity tennis fought hard in their match against Episcopal High School. The were several standout performances from the match, including singles one and doubles one. In singles one, Emily Platukyte had a tremendous and dominate performance, winning her match 10-2. In doubles one, Aves Mock and Lily Mackey showed great partnership and skill, ending their match 6-10. The new doubles teams, including Mary Watson and Holly Crawly in doubles two and Chloe Valcourt and Maggie Needler in doubles three, rose to the challenge and communicated well. All in all, the match was a great learning experience for Madeira Varsity Tennis, and the team looks forward to playing Episcopal again on April 22.