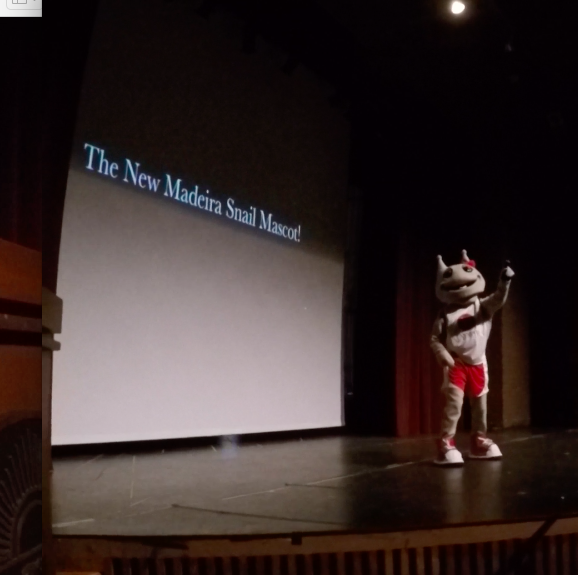 - Check Out The Snail Unveil at the All School Meeting on 10/7 Here!

Cross Country Home Meet vs. Holton Arms
Cross Country ran their only home meet on Wednesday against Holton Arms. Viv Kramer and Keya Chava finish top two for the Snails with time of 23:11 and 23:22 respectively.

JV Volleyball vs. Washington Latin at Home - W, 25-4, 25-19
Madeira came away with the victory Wednesday night at home against Washington Latin in their first volleyball match as a school versus the Snails. The team hit a total efficiency percentage of .429, led by A’Naya Harrison with 5 kills on 6 attempts and Maha Mohamed, Haley Cass, and Sophia Phaltankar all hitting about .883.

Varsity Volleyball vs. Paul The Great Away - W, 25-14, 25-23, 25-10
Varsity Volleyball traveld to Paul The Great and claimed the 3-0 sweep victory to improved to a regular season 6-0 record. Ellie Jordan provided and outstanding performance, with 8 kills and a .444 hitting percentage and adding 9 digs to the defensive front, behind Sophia Bernstein’s 17 assists. Megan Grohowski added a season-high 17 digs, and all active members of the team saw court time.

Varsity Volleyball vs. Holy Child at Home - W, 25-4, 25-16, 25-18
In the home match during Family Weekend on campus, the varsity volleyball team came away with the three set sweep against Holy Child. The team posted 26 aces from the services line, led by Sophia Bernstein's double-double with 11 aces and 24 setting assists. Offense was assured by Bella Dunlop with 7 kills and Ellie Jordan and Sinclaire Jones followed with 6 and 4 respectively. Overall, a solid performance from the Snails, who improve their in league record to 7-0.

JV Volleyball vs. Holy Child at Home - W, 25-4, 25-16, 25-18
After starting down in the match 0–7 to Holy Child, the junior varsity volleyball team rallied back to take set 25- 23. The team was sured by a season high 19 aces in two games, and a season high hitting percentage of .375, led by middles Sequoia Ragland and A’Nya Harrison with 7 and 4 kills respective and both over .500 hitting accuracy. Lily Hunt added 5 digs for the team.

Varsity Field Hockey vs. Wilson High Home - L, 0-1
Field Hockey was tied through the half at 0-0 with Wilson High on Friday 10/7. However, after the hard fought battle, Wilson pulled away with a one-goal victory.

Varsity Soccer vs. Georgetown Day, L 1-7
Varsity soccer suffered a tough loss at Georgetown Day School on 9/30. Madeira found itself down 0-3 af half, with a final score of 1-7. Bella Godes scored the Snails' only goal in the second half, directly off of a set piece from 30 yards out.

Varsity Soccer vs. Sidwell, L, 0-4
In a tough homecoming weekend match-up, Varsity soccer fell to Sidwell Friends on 10/7. Madeira found themselves down a goal early on, and continued to fight through the half, going into half time down 0-2. Madeira created a great scoring opportunity to start the second half, with Sophie Lurashi mishitting the shot off a great cross sent into the 6-yard box. Sidwell's scored a third goal off a penalty kick, awarded for a soft foul during a double team at the edge of the box. The final goal of the match belonged to Sidwell, scored off a great shot from distance that sailed over Bella Valcourt's reach. The final score was 4-0.

Varsity Soccer vs. Episcopal, L, 1-2
Madeira lost a nail biter at home against Episcopal on Tuesday, 10/4. The Snails struck first, when Grace Morgan put away a scrappy rebound following a shot by Alexandra Murphy. Madeira was up 1-0 at half. Following half time, Madeira had a hard time finding their rhythm and eventually conceded the tying goal in the 70th minute. With less than a minute remaining, Episcopal scored again off a corner kick to clinch the 2-1 victory.

JV Tennis vs. St. Andrew’s - W 6,1
JV Tennis competed in an away match against St. Andrew's. The match was spectacular. The team took away an overall win of 6-1! Most of the games were won 8-3 and others were also spectacular scores as well. Although Jordan Kallett didn't take a win for her match, she played very well. The score was very close throughout the entire game, and the Snails were excited about taking the victory.

JV Tennis vs. Sidwell Friends Home, L 0-7
JV Tennis played a home game against Sidwell Friends. Sidwell's team proved a real challenge to our players, but still the players continued to work very hard and have continued to grow over the course of the many games they have played. Overall the team had a loss of 0-7, but the score does not express how much effort and hard work Snails put in.