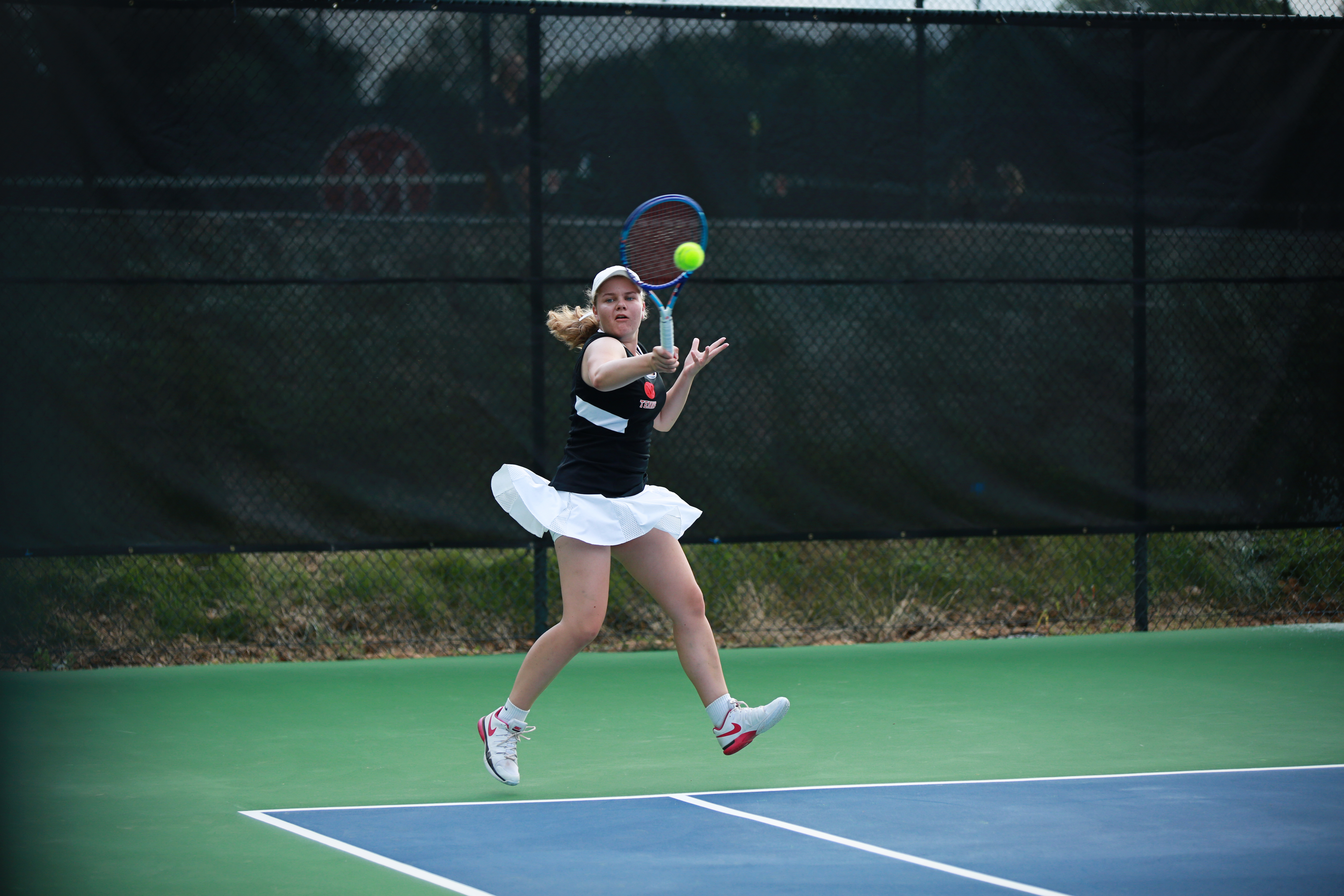 V. Volleyball vs. Sandy Springs at Home - W, 25-5, 25-8, 25-8
The Varsity Volleyball team downed Sandy Springs at Home on Tuesday night in three straight sets. The team posted 29 aces, behind Catherine Daly’s 8 ace points from the service line. The team had an impressive hitting day, with a .326 average. Hitting attempts were led by Sinclaire Jones, with 6 kills on 8 attempts and an amazing .750 efficiency. Bella Dunlop, Jenna Shackelford, Sarah Hughes, and Gillie Tweddle all hit over .333 efficiency on the evening. Megan Grohowski and Ellie Jordan stated 11 and 8 digs respectively, and Sophia Bernstein ran the offensive bought with 21 setting assists. Every member of the team contributed in the match.

Varsity Volleyball vs. Maret Away, W, 25-21, 25-15, 25-23
The Snails traveled on Thursday to face off against the Maret team that ended the post season hopes for Madeira in the ISL tournament last season. This matchup proved differently for the Snails, as they walked away with a decisive three set victory against a good Maret offense in an energetic battle. Defense was led by team captains Bella Dunlop, who provided a career high 11 stuff blocks, and Ellie Jordan with a season high 17 digs. Sophia Bernstein ran the well balanced offense with 17 assists, and Megan Grohowski helped lead the team to victory with a solid serve receive and defensive performance. This was a big victory for the Snails (4-0 in conference play), and they look forward to continuing their success.

JV Volleyball vs. Sandy Springs at Home - W, 25-9, 25-12
JV Volleyball won in decisive fashion at home against Sandy Springs on Tuesday. With 25 aces and a .714 hitting efficiency as a team, the Snails handled their opponents evenly throughout the match. The team was led by Sequoia Ragland, hitting a perfect 100% with 4 kills on 4 attempts. Gabriel Russo, A’Nya Harrison, and LeLe Corman all hit over .667 in attacking at the net. Abigail Melton provided 7 assists, and all members of the team found time in the matchup.

JV Volleyball vs. Maret Away, L
In a tough battle against Maret, the JV volleyball team lost in three sets but provided a great effort. Going into set one, the team was energized and ready to play, taking the first set from the Frogs. Set two provided a little more difficult, and the Snails dropped a near win. Maret came away with the match with a win in a very close set three.

Varsity Tennis vs. Bishop O'Connell At Home, L 2-5
Madeira Varsity Tennis fought hard, but fell 2-5 to O'Connell (#7 in VIS poll). Madeira varsity team was led by victories from #1 Singles Emily and #2 Doubles team Marina/Bella. Madeira varsity tennis team lost two close matches #1 doubles Aves/Lilly 8-10 and Reilly #4 singles 8-10. The team looks forward to improving in their next match against Stone Ridge, and coming away with the victory.

V. Field Hockey vs. Stone Ridge, L 0-9
The Snails were hit with both injury and illness throughout the week leading to the tough matchup with Stone Ridge. Zoe Crawley came away with another great game. The match was highlighted by Madeira’s strong showing in the 5 corners in a row at the tail end of the game. During that stint, the offense fired off a few shots that barely zipped past the cage, but the attack did a fantastic job keeping it in the circle and getting more corners on an unsuspecting Stone Ridge defense.

Varsity Field Hockey vs. National Cathedral Away, L 1-3
Field hockey play the NCS yesterday. With another knockout game Zoe Crawley had over 30 saves and we got Laura Simpson into the cage. Mary Clark scored our first goal of the season and our attack was on point with five corners all in a row nearly missing the net twice.

JV Field Hockey vs. Stone Ridge Away, L 0-1
JV field hockey lost 0-1 in the matchup against Stone Ridge. The game was a close one, and the team fought incredibly hard. The Snails' defense was strong, with many of our players coming our strong and fighting to keep the ball away from the goalies. Laura Simpson ’19, goalie, said “I only saw two shots. Our whole JV team plays defense!” which is something the coaches have been working on a lot this season. They are looking forward to getting the ball up the field, and focusing on the transition to attack this week in practice. Esi Gadese-Mensah ’20 had a fantastic game at half-back, as well as Lily Rathbun ’20 at full-back.