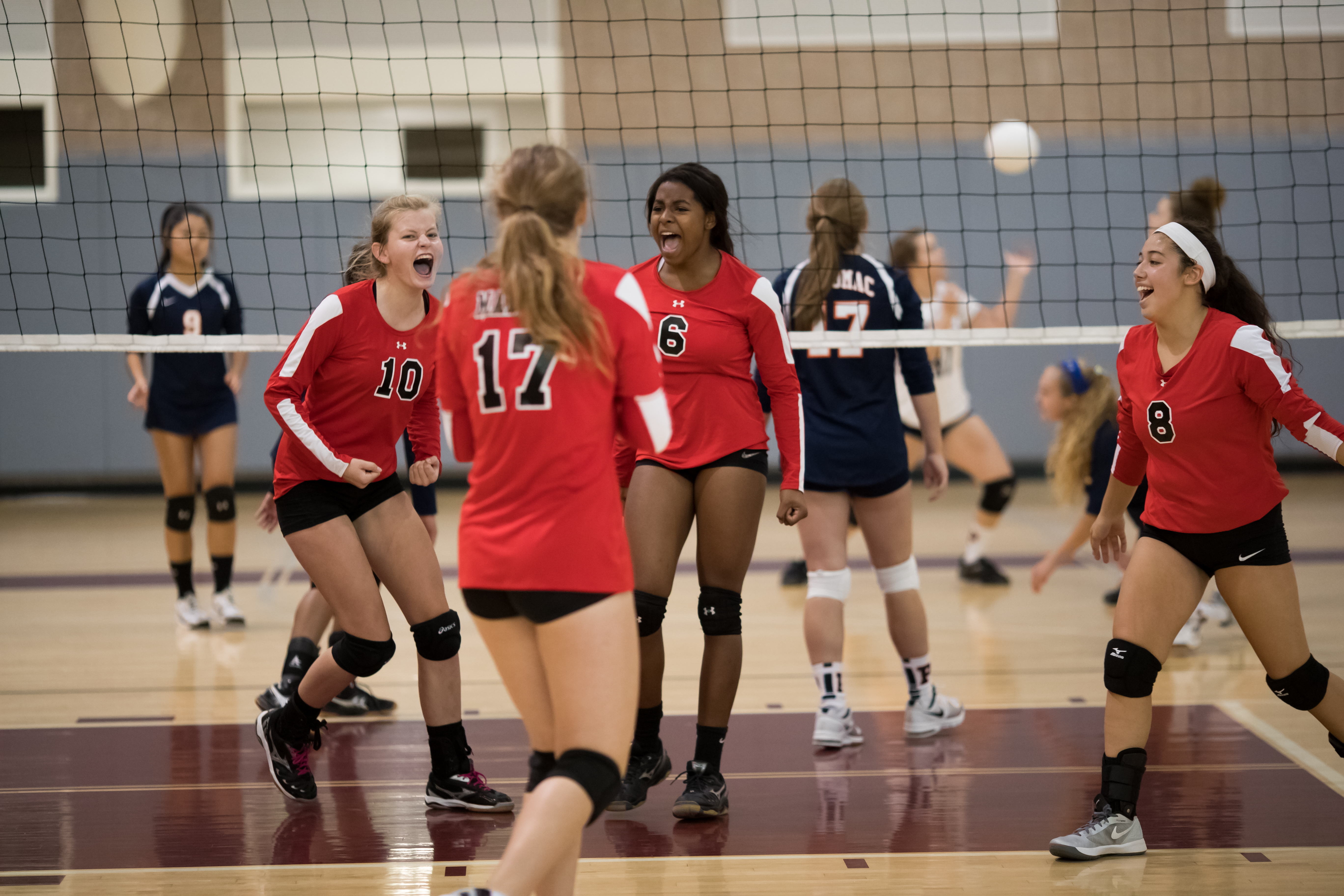 Madeira's win against Georgetown Day School was led by #1 singles Emilija Platukyte winning 10-4. # 2 doubles, Marina Akhavein and Bella Simmons, won with a score of 10-7. #3 singles Chanel Dulay had a great comeback being down 5-7 to win 10-8. Briana Harrington and Chloe Valcourt won a great and final match at 10-7 wrapping up Madeira Varsity Tennis's second win in the ISL this season. Tennis will face off against Oakcrest Friday evening.

The team once again played very well, and the team spirit was high in many of the players as they watched their teammates play. Sharon Ge and Jordan Kallett performed very well in their perspective singles. Their progress is showing every match as they are learning to strategize and understand their opponents weaknesses and strengths. Charlotte was once again a major highlight of the night and won 8-3. The team overall took a loss of 2-5, but are steadily getting better.

Varsity volleyball defeated Holton-Arms at Thursday night at Home in three straight sets. The Snails proved well from the service line with 16 aces, led by Sarah Hughes' 4 aces, and a solid team performance in serve receiving. Ellie Jordan had a well rounded day with 3 aces, 10 assists, 7 kills, and 4 digs, with a 50% kill rating on her 14 attempts. An impressive offensive night with an overall 22 kills and .229 hitting efficiency, the team was led by Bella Dunlop (.500), Catherine Daly (.500), Sarah Hughes (.600), and Natalie Parsons (.444). All 14 members of the squad saw the court for playing time.

After dropping the first set in additional play (24-26), the JV Volleyball team fought back to win the next two sets and claim the victory in exciting fashion. The team posted 10 aces from the service line, led by Victoria Zhang with 5. Mara Delta posted 6 kills with an efficient hitting percentage of .417, and Lilly Hunt provided a well-rounded game from all areas of play.

The Junior Varsity Field hockey team traveled to St. Stephen's and St. Agnes, Wednesday. The final score was 0-4 however, the girls played a great game especially the back defense including our goalies Laura and Savanah along with a strong defender Lilly on the back post.

JV soccer lost to Holton, 0-8. The team had to scramble to fill in and cover unfamiliar positions as we came down with a slew of injuries, but did well in spite of the tough matchup.

JV soccer rebounded well from Tuesday's game against Holton and beat Oakcrest 3-0. The team played well together and took huge steps forward. Kelly Nguyen led from the front and the defense was firmed by Lauren Butia's solid performance in goal.

Varsity soccer lost to Holton-Arms at home on Tuesday. After an organized and hard-fought opening, Madeira conceded 3 goals towards the end of the first half, one of which was scored off a penalty kick. Madeira continued to fight and compete in the second half. The final score was 1-5, with Bella Godes scoring Madeira's only goal directly off a long set piece.

Varsity soccer fell to Oakcrest on Thursday night. Despite creating several scoring opportunities early on, Madeira found itself down 2 goals at half. With a chance to bring the score within one, Madeira did not capitalize on a penalty kick awarded in their favor. Oakcrest scored again to put the game out of reach, and the final score was 0-3.