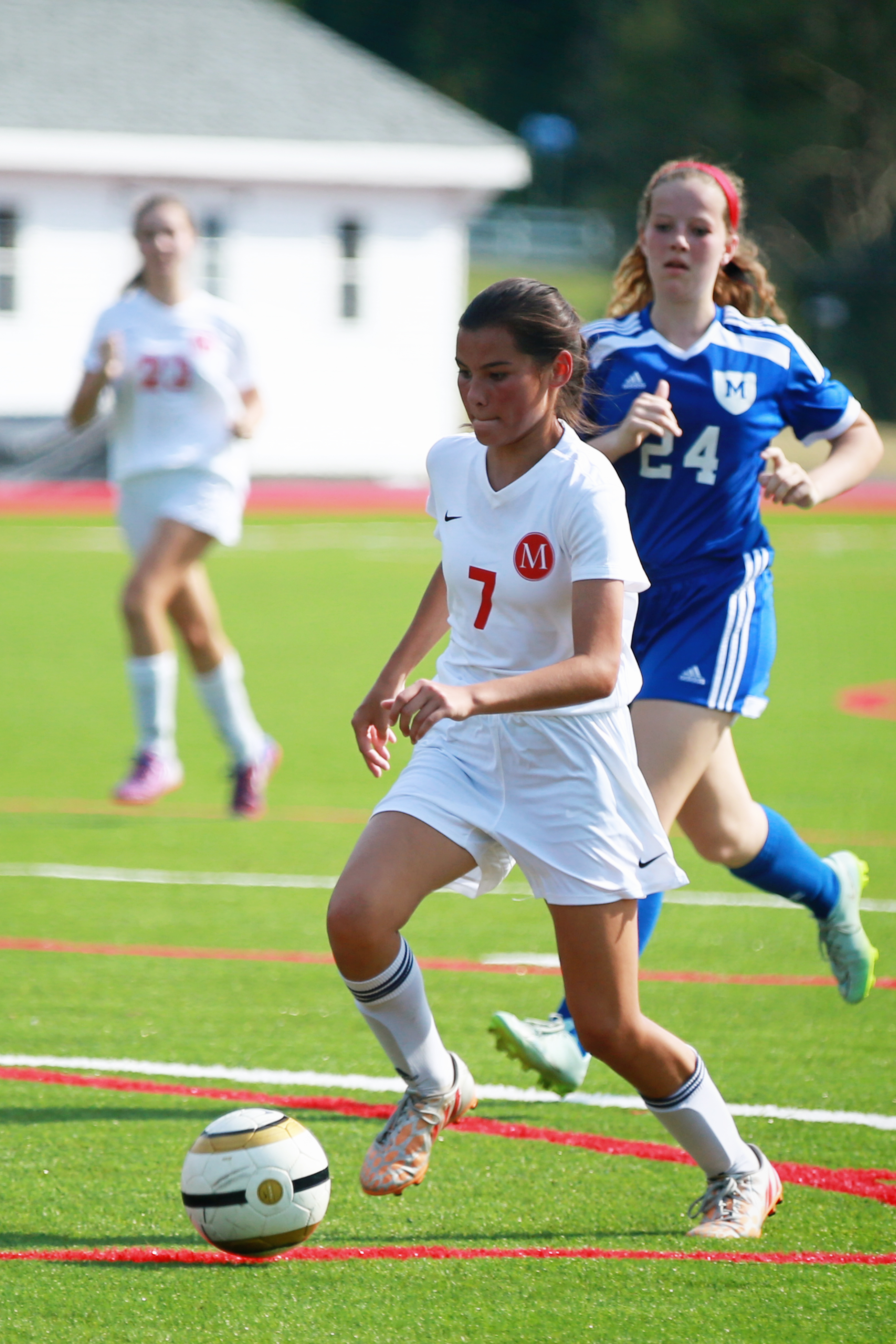 - Check Out The Snail Unveil at the All School Meeting on 10/7 Here!

Varsity Volleyball vs. SSSAS Away - W, 25-19, 25-18, 25-6
Sinclaire Jones led the Snails with 8 kills and a career high .727 hitting percentage in the away match versus SSSAS. Bella Dunlop added 7 kills on offense. Sophia Bernstein provided 25 assists and Megan Grohowski added 11 digs to bring the Snails to 8-0 in regular season matches.
Varsity Volleyball vs. Sidwell Home - W, 18-25, 25-16, 25-21, 28-30, 15-13
In the most exciting match this season, Madeira pulled out the victory against an evenly matched Sidwell Friends School. Serve receive was strong for the Snails, which allowed a strong offensive performance for the team. Sophia Bernstein led a well-balanced offense with a double-double - career-high 43 assists and 10 digs. Ellie Jordan had 11 kills and a career high 30 digs for the double-double, and Mia Paglialunga provided a consistent performance with 10 kills and 10 digs for the third double-double of the match. Sinclaire Jones also posted 10 kills from the middle, and libero, Megan Grohowski added 19 digs and a phenomenal save in the fifth set that helped rally the Snails to victory!
JV Volleyball vs. SSSAS Away - W, 25-20, 15-25, 15-4
JV Volleyball defeated St. Stephen St. Agnes School in a tight three match battle this week. Lily Hunt provide a strong serving performance with 9 aces and added 7 digs. Sequoia Ragland had 7 kills behind Abigail Melton and Victoria Zhang’s 15 assists.
Varsity Soccer vs. Washington Latin Home - W, 4-2
JV Soccer vs. Oakcrest Away - L 1-2
JV soccer went down to Oakcrest 2-1 on Tuesday. After a scoreless back and forth first period, Sofi Maruffo scored a quick goal early in the second half to put Madeira ahead 1-0. Oakcrest followed minutes later with a goal of their own. With under a minute left in the second half, Oakcrest scored a contentious game winner. The team is struggling with injuries and did well in spite of these problems. Yaje Nshanji had a solid game linking the defense to offense. Jessica Wang covered for injured players very well and had a breakout performance.
Varsity Field Hockey vs. Mercersburg Home - L, 3-0
In an incredible first half, the Snails held Mercersburg close. With a great defensive line, field hockey was able to keep the opponents on their toes. After an unfortunate goal, the momentum shifted and provided the opportunity for two more quick goals. The second half provided the chance for quick glimpses of hard effort from the Snails, but it wasn’t enough as they fell to Mercersburg.
Varsity Field Hockey vs. Flint Hil Home - L, 0-1
After such a tough loss to Mercersburg, the Snails came into the Flint Hill game ready to roll. "Switching up the line-up by quite a bit, and the girls responded with incredible team spirit and effort. It was a great game, which we were very sad to not come out victorious with. The girls played so well, and we had just 1 unfortunate goal against us, losing 0-1 to a good team. It was a rowdy game, but such a fun one to coach and watch, the players were fantastic, with Trudy Painter stepping up on defense, and Mary Clark coming up big in the midfield to really show their leadership and skill.”

JV Field Hockey vs. NCS Away - L, 0-4
The JV field hockey team traveled to National Cathedral School on October 12. They had a great second half. However, National Cathedral School won with a score of 0-4. Everyone played well and put their best into the game. Shoutouts to Gabby McClellan, Natalie Seara and our goalie Savannah Robinson!
Varsity Tennis vs. Holy Child Away - W, 4-3
Madeira Varsity Tennis played well against Holy Child, winning 4 games to 3.  Singles players Emilija Platukyte, Chanel Dulay, and Reilly O'Flahrety won their matches.  Briana Harrington and Bella Simmons ended their #2 doubles game with a score of 10-0 clinching the victory for Madeira.  As the Varsity Tennis Team continues to practice hard, the girls are looking forward to play their next match against Sidwell.
Varsity Tennis vs. Sidwell Home - L
JV Tennis vs. Sidwell Away - L
The team really put in a lot of effort and determination today. Single #4, Jordan Kallett did amazingly. She started the match down 0-7, but as the game progressed she pulled all the way up to 5-8. Although it was a loss, the score definitely did not reflect how much effort she put into this match. Double #1, Claire and Isabel, really worked hard in the match. Double #2, Ally and Vicky played their best game in the season so far. Double #3, Jaeun and Ashley did great as well.