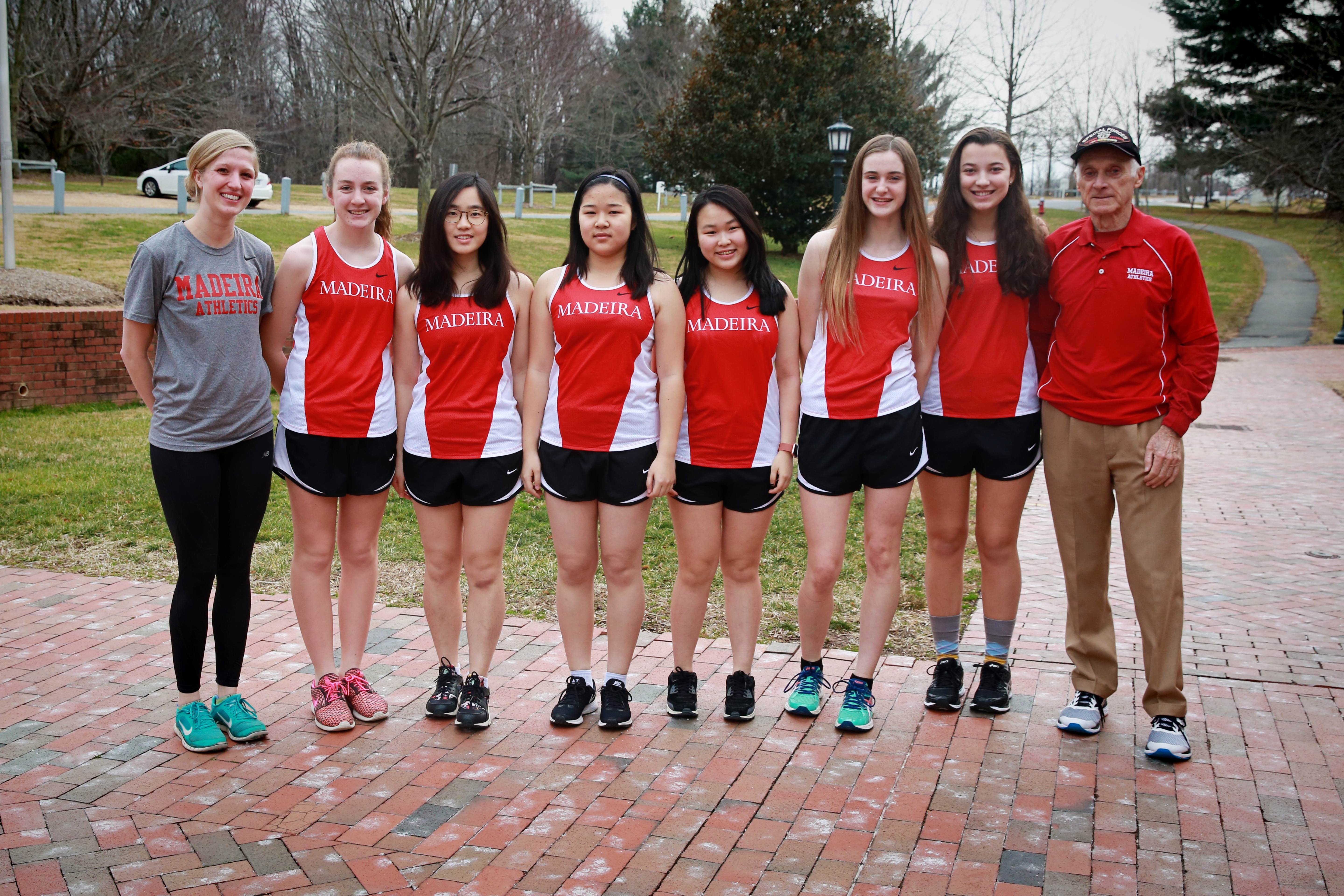 Check out actions shots of your favorite athletes here!

Winter track competed in the Episcopal High School Indoor Invitational. Monte Saunders broke a 500 m school record with a time of 1:25:58! Congratulations to all of our runners on their success.

The Madeira varsity swim and dive extended their undefeated streak to 6-0 with a win over St. Steven’s and St. Agnes’ School 114-67 on Friday, 1/20 at Madeira’s Hurd Sports center.

“This was a great chance to rest some of our top swimmers before two tough meets next week and our rookie swimmers really stepped up for the challenge.” Said Madeira coach Rod Montrie. “ Sophie Tilton ‘20 won the 100 Breaststroke dropping her best time by two seconds and also swam a great 200 IM. Victoria Zhan’20 and Keya Chava ’20 swam great relay splits. Senior captain Sahana Bhagat had a great 100 Butterfly and an awesome 200 freestyle relay time.”

The Madeira Varsity Swim and Dive Team extended their undefeated season to 7-0 with a 98-88 win over The Collegiate School of Richmond, the reigning VISAA State Champions, at Madeira’s Hurd Sports Center this week.

“This was a huge win for our program.” said Head Coach and Aquatics Director Rod Montrie. “To beat the defending state champions shows what a determined group of young athletes we have. I saw many courageous swims tonight.  Izzy Gati and Maddie Heilbrun are true superstars, and Sofie Davis established herself as one of the top freshmen in the state. Meaghan Doyle '19, Giovi Moriarty and Niya Kelley '20 swan incredibly gutsy races. Our divers Claire Simpson '17 and Leah Fine '17 came through when we needed them and we had beautiful swims from Grace Bilicki '17, Lindsay Lukehart '19, Lily Rathbun '20, Morgan Rushforth '19, Grace Frerichs '20, Sophia Bernstein '19, and Molly Watts '20. I couldn’t be more proud of our girls.”

Madeira looks to extend winning streak at the ISL Championships at the end of this week, with diving at The Madeira School on Thursday, January 26, and swimming at Holton-Arms on Friday, January 27.

JV Basketball hosted Holton Arms on Tuesday, January 24. After being down 42-25 starting the fourth quarter, the same five players pushed through and outscored the panthers 10-2 in the fourth. Although the Snails fell, they took confidence from the second half and were encouraged in their press and offensive systems.

JV Basketball defeated Episcopal School 36-14 at Ainsley Court in Alexandria. After losing by 20 the year before, the Snails started with a strong lead in the first, and never lost the control of the game. Every player for the team saw action, and the team was led in scoring by Margo Matheson, Gabby McClellan, and Maggie Needler.

This past Tuesday, Madeira took on Holton Arms. Though losing the game 58-32, sophomore Lauren Grohowski had a career high with 8 points. Freshman Amara Eley had 15 total points with Senior, Hannah Adams adding 7 points.

Varsity Basketball vs. Episcopal Away, L

On Thursday night, Madeira played Episcopal high school and lost 27-56. It was a hard fought game with Freshman Amara Eley scoring a total of 15 points, and freshman Annie Newton and Senior Bella Dunlop adding to the offensive effort in the loss.

On Tuesday, the Madeira Varsity Squash team fought hard against Sidwell Friends. Although the team did not win overall, players Catherine Daly (3-0), Charlotte Chen (3-0), Calla Ritland (3-2) and Nandi Ndoro (2-0) all were victorious in their matches.

Madeira Varsity Squash was victorious in their match against Stone Ridge with an ending score of 6-4! Next up is Mercersburg away on Tuesday (1/31).