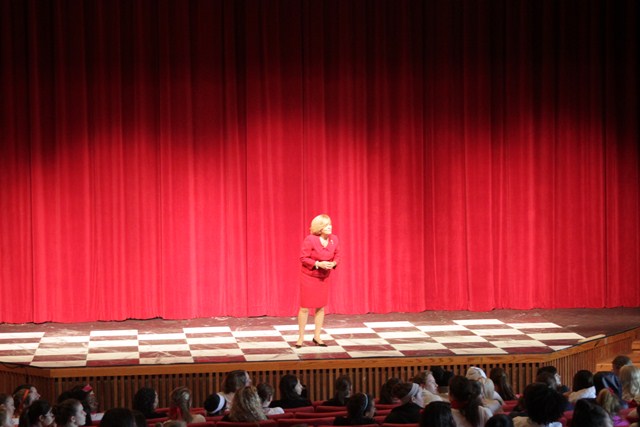 At the All School Meeting on October 26, Ambassador Deborah Jones (a Madeira mom to Ana Olson '10 and Izzy Olson '12) shared her experience of serving as a diplomat with the U.S. Department of State for the past 30 years in countries such as Kuwait, Iraq, and Saudi Arabia.

Ambassador Jones addressed Madeira students at the All School Meeting and shared some of her experiences serving in the Foreign Service as a diplomat with the U.S. Department of State.

The Ambassador has served in countries all over the world, and mainly in the Middle East, including Iraq, Ethiopia, Saudi Arabia, and most recently as Ambassador to Kuwait. She explained that her job is largely managing internaltional relations between countries. "It's about making friends and influencing enemies," she said.

Ambassador Jones also talked about the nuances of being a diplomat and how engaging with diplomats from other countries requires an understanding about just how much can be shared with the other party. "There's a difference between being perfectly honest and true, and being completely honest and true."

Madeira girls asked questions about how one gets into the Foreign Service and the Ambassador walked them through the process of applying, written exams, oral exams and interviews and how the Department of State will start with 20,000 applicants to end up with the 400 they are budgeted to hire. She also said, "You're more competitive the more experience you have in life. We look for creative people who can interact and listen."

Another student asked what it was like living in Iraq during the Iran-Iraq war in the 1980s when Saddam Hussein was in power. "You find ways to operate and you learn a lot about yourself," Ambassador Jones said. "Iraq was hard, but I was treated with respect as a representative of the U.S. government and because I knew how to behave in that environment."

To the question about her most enjoyable assignment in the world, Ambassador Jones said, "Istanbul is a magical city and the work was very interesting. I also loved Damascus and Kuwait. All had a lot to offer."

Finally, the Ambassador spoke about "Sovereign Territory" and how the host country is supposed to protect a foreign embassy. She also indicated that the U.S. Constitution does not protect a U.S. citizen everywhere in the world.

Ambassador Deborah Jones gave the Madeira audience some great insight into her career in the Foreign Service and few light moments as well.