All-Stars from politics and CNN come to Madeira 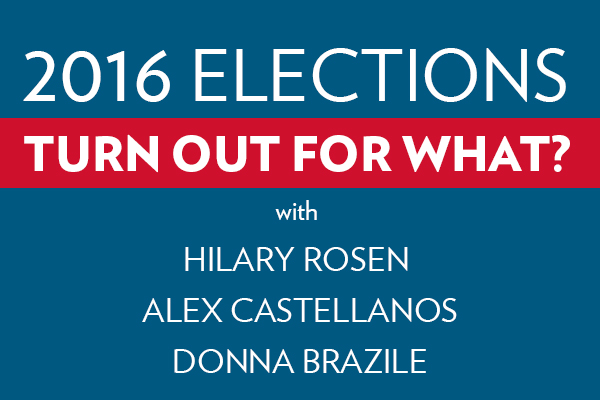 On October 16th, Madeira mom, Hilary Rosen, a public relations and political consultant and a TV pundit on CNN, will moderate a panel on the 2016 Elections with two all-stars from politics and CNN.

Hilary and her panelists, Alex Castellanos and Donna Brazile, will discuss the presidential primaries, what’s at stake in the election and how students typically get involved in campaigns.

Hilary Rosen is a Democratic strategist who serves as a political commentator for CNN, appearing across the network's programming and special political coverage. Hilary is a well-known strategist who navigates the intersection of communications, media, and politics. She has been an advisor to the many federal candidates as well as the Democratic National Committee. She was the first Washington Editor and Political Director for The Huffington Post and prior to CNN was a contributor at MSNBC and CNBC. She is a regular political columnist for The Washington Post and her articles have also appeared in numerous publications nationwide and on CNN.com.

Rosen is the former chairman and chief executive officer of the Recording Industry Association of America (RIAA), the trade group representing the U.S. sound recording industry where she served for 17 years before retiring in June 2003. At RIAA, Hilary was a force guiding the entertainment industry's political efforts. Her name appeared regularly on influential year-end power lists including Entertainment Weekly's "Annual Power List," The Hollywood Reporter's Power 50 Women, and National Journal's "Washington's Powerful Insiders."

Rosen is also a prominent voice for LGBT equality and was named by the National Journal as one of 25 most powerful LGBT players in Washington DC; one of Out magazine's 100 list for her leadership of the Respect for Marriage Coalition, the media campaign which accompanied the historic same-sex marriage wins at the Supreme Court in June 2013. Her well-known legacy of activism on behalf of the LGBT community started in 1982 when Rosen joined the call for federal action on AIDS and has continued on multiple campaigns. She is profiled in a book Pennsylvania Avenue: Profiles in Backroom Power (2008) by John Harwood and Gerald Seib for her management of the successful 2004 campaign in Congress to defeat President George W. Bush's proposed Constitutional Amendment banning same sex marriage.

Rosen is a founder of Rock the Vote, the organization that promotes youth political involvement. She is also currently a managing director of SKDKnickerbocker, a leading public affairs and strategic communications firm with offices in DC, NYC, and LA.

With nearly four decades of political and private sector consulting experience in the U.S. and around the globe, Alex Castellanos has developed communications strategies and campaigns for some of the world’s largest companies and helped elect U.S. Senators, Governors and Presidents. Castellanos co-founded Purple Strategies, a bipartisan public affairs firm, appears regularly on Meet the Press and currently serves as a member of CNN’s “Best Political Team on Television.”

In 2007, GQ Magazine named him one of the 50 Most Influential People in D.C. He has been a Fellow at the Institute of Politics at the Kennedy School of Government at Harvard University.  He has also been credited with the discovery of the political “soccer-mom” and called “father of the attack ad.”

A native of Havana, Cuba, he is fluent in Spanish and English. His parents, refugees who fled Castro’s Cuba in 1961, came to this country with one suitcase, two children and eleven dollars.

Aside from working for the full recovery of her beloved New Orleans, Ms. Brazile’s passion is encouraging young people to vote, to work within the system to strengthen it, and to run for public office. Since 2000, Ms. Brazile has lectured at over 125 colleges and universities across the country on such topics as “Inspiring Civility in American Politics,” Race Relations in the Age of Obama, Why Diversity Matters, Women in American Politics: Are We There Yet.

She first got involved at the age of nine when she worked to elect a City Council candidate who had promised to build a playground in her neighborhood; the candidate won, the swing set was installed, and a lifelong passion for political progress was ignited. Ms. Brazile worked on every presidential campaign from 1976 through 2000, when she became the first African-American to manage a presidential campaign.

Author of the best-selling memoir Cooking with Grease: Stirring the Pots in American Politics, Ms. Brazile is an adjunct professor at Georgetown University, a syndicated newspaper columnist for Universal Uclick, a columnist for Ms. Magazine, and O, the Oprah Magazine, an on-air contributor to CNN, and ABC, where she regularly appears on ABC’s This Week. Her secret passion is acting; she has recently made two cameo appearances on CBS’s The Good Wife. Ask her and she’ll tell you that acting, after all, is the key to success in politics.

In August 2009, O, The Oprah Magazine chose Ms. Brazile as one of its 20 “remarkable visionaries” for the magazine’s first-ever O Power List. In addition, she was named among the 100 Most Powerful Women by Washingtonian magazine, Top 50 Women in America by Essence magazine, and received the Congressional Black Caucus Foundation’s highest award for political achievement.

She is currently on the board of the National Democratic Institute (NDI), the Congressional Black Caucus Foundation, and the Joint Center for Political and Economic Studies.

Last, but never least, she is a native of New Orleans, Louisiana. In the aftermath of the two catastrophic hurricanes that made landfall in the Gulf region, Brazile was appointed by former Governor Kathleen Blanco to serve on the Louisiana Recovery Board to work for the rebuilding of the state and to advocate for the Gulf recovery on the national stage.