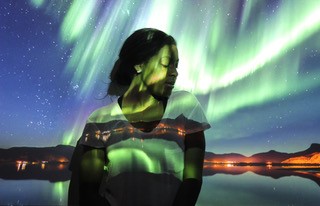 As the year comes to a close, the Advance Photography class presented their final projects using a variety of techniques learned throughout module 7 and their previous photography classes.

Advanced Photography is a portfolio-based course. Students are guided through the creation of projects of their own interest. Additional portfolio critiques and the work of current artists are explored and they are able to grow as artists.

Students incorporate three components while working on their final photo series; concentration on a single topic, experimentation, where students use an experimental technique such as Photoshop, projections and text and image and finally, the creation of a complete and quality portfolio.

Senior Cyan Perdue experimented with projected images onto her subjects.

“I decided that I wanted to use my series to show how beautiful the black girls on this campus are,” said Cyan. “I used them as my models and then the series became a series of brown girls and the projections were images that were chosen by them and of things that make them happy.”

“My photos are dark in nature, I wanted to portray a calm, almost eerie tone. The blue tones add to the effect, as well as the ghostliness of my figure, said Sierra. “The lines of light give the photo an unreal, futuristic effect and provide enough light to brighten me, the subject, but leave enough of the image dark that the photos still look mysterious.”

Sinclaire Jones ‘17 used a mirror as a metaphor and created images within images in the mirror.

“In this photo series I intended to capture images with contrasting attitudes and contrasting scenery,” said Sinclaire. “I captured my subject looking into a mirror in one setting and then placed them into a landscape opposite from the one they were currently in to illustrate a longing for a change of scenery. The slight transparency of the mirror image allowed the background to peek through emphasizing the idea of escape—a partial escape, but an escape nonetheless—through imagination.”

Advanced Photography teacher Linda Northrup said she was very impressed with the work this year.

"The students worked hard organizing their materials and models," she said. "They incorporated many suggestions that were brought up during the weekly critique sessions and they created meaningful, beautiful works of art.”