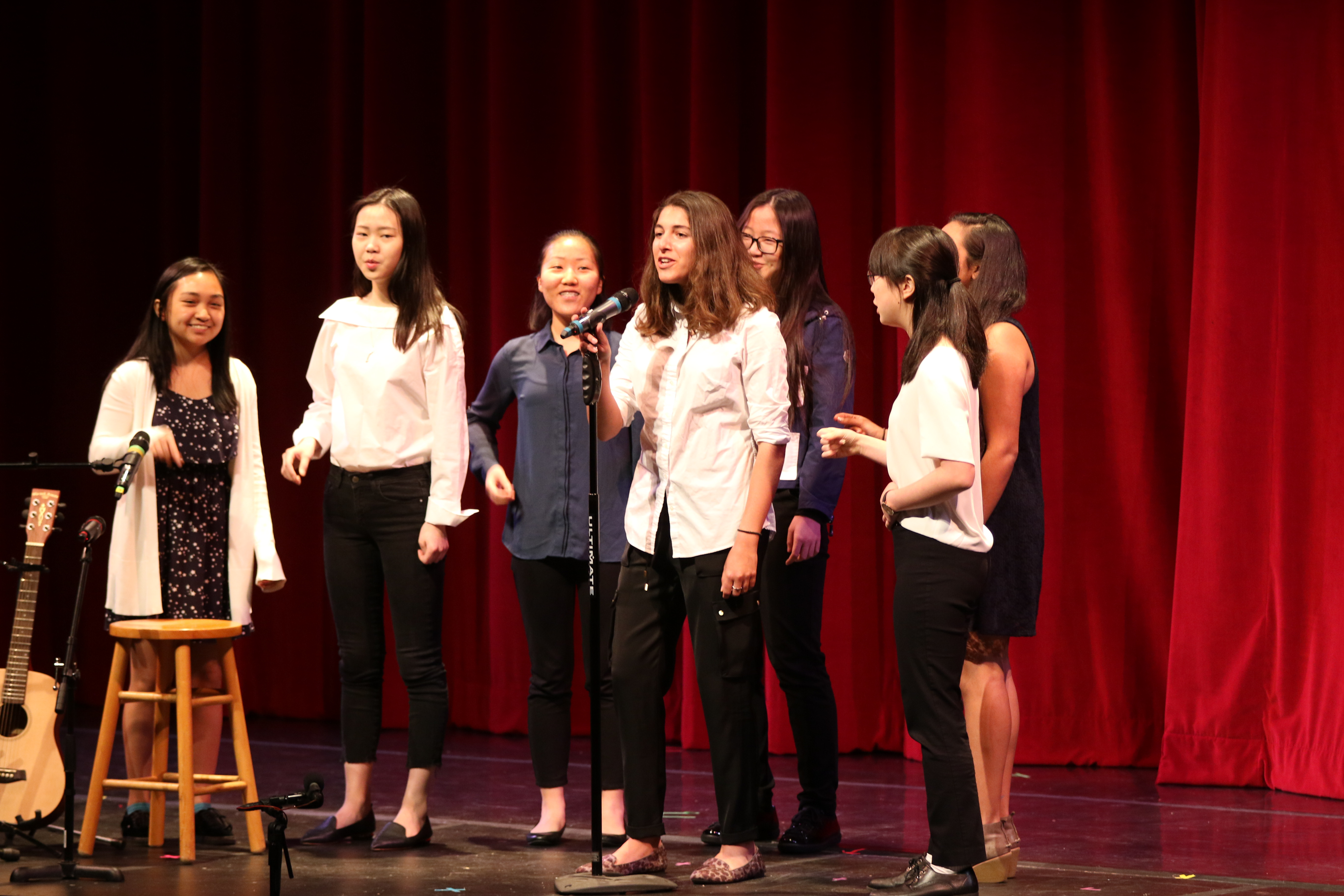 SpringFest is an annual event in which the visual, performing, and musical arts are celebrated. This year the students excelled in every routine, song and showcase. The audience enjoyed the brilliant Madeira dancers, stunning art presentations, and musical performances by individuals and groups like Sweet Ti and Madeira Glee.

Visual Arts: Wallis Huang
Wallis Huang has made many contributions to the visual arts community during her four years at Madeira. Her art has been showcased all over campus, multiple times - and has often made people stop and look back, so they can have a chance to take one more look. Her peers have described her art as “outstanding” and her teachers have say that she “consistently works to increase her knowledge of artistic techniques with an understanding of cultural relevance.” We are confident that everyone on campus is looking forward to seeing what she does in the future.

Digital Arts: Queen Obosu
Queen Obosu has been an integral part of the digital arts community, particularly in film. She has been an avid student in film classes, and this year she has helped tremendously to coordinate the Madeira film festival. When in doubt, you can find her filming your fellow peers screaming in the library, or filming a YouTube video for her infamous channel. Students have regarded her work as “phenomenal” and her personality as “one of a kind.” Teachers believe “Her enthusiasm, leadership and commitment are exemplary and her vision for using film to change the world is inspiring.”

Performing Arts: Dance - Liana Song
It has been a pleasure to watch Liana Song grow in both dance and in performance for the last four years. She joined dance with absolutely no dance experience, but was asked to join select by the time she was only a sophomore by showcasing her dedication, passion, and love for dance. Her teacher says that, “She has proved to be one of the most improved and dedicated students,” which evident in her performances over the years. Her peers have regarded her compassion for others as undeniable and her greatly recognized positive influence is a staple of the Madeira dance family. We are honored to present the MAC Performing Arts Dance Award to Liana Song.

Performing Arts: Vocal Music - Lily Moriarty
Lily Moriarty has been contributing to the Madeira vocal music community since her freshman year. Here voice has graced our stage numerous amounts of times where she has learned and grown into the leader in the vocal music community who she is today. She helped develop Sweet Ti into a high-functioning, energetic, and creative vocal group and her teacher says that she has willingly “shared her talents, dry humor, and wit in musical productions” throughout her entire Madeira career. She has also been an active member of Madeira glee where she has been integral to the arrangements of the small groups she has been a part of. Her peers say that “her commitment to Sweet Ti, Glee, and theatre at Madeira has been truly inspiring”

Performing Arts: Instrumental Music - Lucy Li
Lucy Li has been an essential member of the Madeira orchestra for 3 years. Her talent has been a true asset to the group, along with her adamant enthusiasm for music, passion, and “exceptional musicality.” Her teacher says that she, “brings passion to every rehearsal, inspiring her peers to strive to their best efforts.” In addition, this student is a founding member of the Tri-M Music Honor Society at Madeira. Through that she has helped facilitate new opportunities for music students at Madeira to use their talents for community service and to work collaboratively in student-led musical events.

Performing Arts - Theater/Acting - Claire Pitzer
Claire Pitzer has been an integral member of the theater community her entire Madeira career. Each year, she took it upon herself to be the best that she could be all whilst helping everyone around her in every and any way she could. When asked to talk about her, her peers called her voice “beautiful, but a beauty that cannot be described in words,” her acting as “inspiring,” and her personality as “unmatched.” Her teachers say she is a “leader and a pillar of the Madeira theater program.” This year, her incredible performance in our Winter Musical Into the Woods, earned her a Cappies Nomination for Lead actress in a musical. Her presence in the Madeira community will be truly missed next year.

Performing Arts: Theater/Design and Production - Millenah Nascimento
Millenha has been a member of technical theater at Madeira for three years. Her commitment and excitement about tech was clear from the beginning when she grumpily complained her freshman year to the tech teacher about how she couldn’t do tech because it was full. Once she joined, however, there was no going back. She’s done everything from stage managing shows with over 350 light cues to teaching the simplest All School Meeting, many Fridays arriving by 8 AM so that she can help set up. Her teachers say, “She graciously accepts every challenge put in front of her and even makes time to train the next generation of techies.” Also they have said, “Her design and management skills have combined with a maturity (and yes – sense of humor) to make her one of the most talented and effective stage managers I have had the pleasure of working with.” She’s also a source of energy and enthusiasm to both techies and actors. Being in shows with her has been a joy in my life, and the lives of many others. This student also didn’t know she would be receiving this award this evening because her co-head, along with the help of some trusted adults and students, thought it best that she didn’t know until the night of Springfest, so that’s this whole surprised look she’s giving me! She’s an amazing techie, and tech simply won’t be the same without her next year.