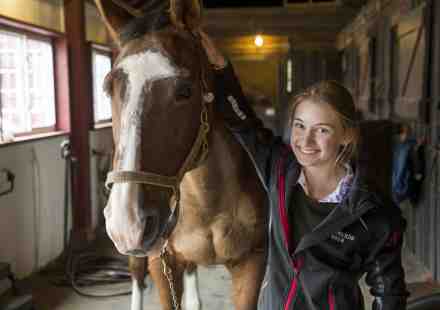 Our equestrian program relies on the generous donation of quality horses.

When I was a junior day student at Madeira, my father died unexpectedly. My mother couldn’t keep both our horses, so we brought darling Red to Greenway, where he lived, worked, and died as a great school horse long after I graduated. I had a wonderful time those two years with Red. Although I was a middling rider—second team and then eventually first sub—the stables was always a place I could go to and belong. I still love to remember the cross country course through the woods, hanging out and helping at the stables, seeing a new-born foal, and trying to learn Mahjong at Miss Gaines' and Miss Barclay's farm in Leesburg.

At some point, Mildred and Madge decided I was ready to hunt, and I was all signed up for the next excursion. I don’t think Madeira went hunting very often; it was to be quite an event and I was thrilled. In the meantime, one day we were doing the stadium course in the outdoor ring. I knew that Red and I were loved, but it was for what we clearly were—a couple of nice kids that weren’t going any farther in the equestrian world. At any rate, he was not adverse to a refusal, and we had put on several disgraceful exhibitions since his arrival.

But there we were, jumping the course. I clearly remember the fence right next to a tree, followed by a sharp left turn. Red and I sailed over it, and I thought all was well until I heard Miss Gaines’ unbelievably piercing shriek, “Maggie Pendleton, your eyes were closed over that fence! You can’t hunt with your eyes closed!” And, sure enough, I was off the list.

I know I was terribly disappointed but I knew Ms. Gaines was right. I did close my eyes when I jumped, routinely. And I’ve always remembered that lesson: if you can’t show that you’re ready, you’re not ready. Maybe the hunt would have been a thrill but, if I survived it, I wouldn’t have seen much of it.