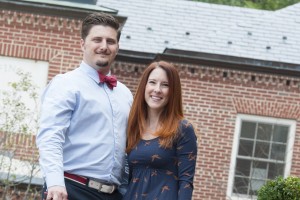 Mr. and Mrs. Southworth with their dogs Henley and Eve

In July of 2014, Hunter Southworth was named Director of Residential Life for Madeira. Southworth, a graduate of a boarding school himself, brings a keen understanding of secondary school community life and the nuances that make a boarding program successful. The position was a natural fit for him, as he has been part of the Madeira community for over eight years, working in the Development Office, and living on campus much of that time.

Southworth’s connection to Madeira started long before he began working at the school. It was Madeira’s award winning Co-Curriculum program that first introduced him to the dynamic educational opportunities afforded our students. Southworth was working on Capitol Hill, and one of his responsibilities was to coordinate the intern program for the office of Congressman Shays from Connecticut. He worked closely with two Madeira interns, Cille Meberg (`07) and Angela Dean (`08) to fulfill their congressional internships. In 2006, when Southworth left Capitol Hill for The Madeira School, he told his grandmother of his new employment, and she informed him that he has not one, but two relatives who attended The Madeira School. His great Aunt, Elmeda Ansell (`21), who attended at the Dupont Circle campus, and his mother’s cousin, Tracy Ansell (`50). As a result of his legacy connections, he’s a proud member of the Red team.

Reminiscing of his own high school days at Kent School before he became a boarder his senior year, Southworth says, “I spent a huge amount of time on campus as a day student, so to me, ‘residential life’ encompasses not just the needs of the boarding population, but everyone in our community. At Madeira, we look for ways to engage our day students in dorm activities and evening events however we can.”  He went on to graduate from Colgate University with a degree in political science while also a member of the school’s Division 1 men’s varsity rowing team.

As Director of Residential Life, Southworth has responsibility for numerous areas of student life, not the least of which is ensuring that Madeira offers a welcoming, inclusive, and bustling campus. This includes managing room draw and roommate assignments, as well as larger challenges such as refining the system for faculty presence in each dormitory. With the dorm modernization project well underway, Southworth’s leadership is vital to managing the inevitable juggling of student and adult living spaces as buildings are being renovated and then become available again for habitation.

It’s not all about where to sleep and study. A key goal for Southworth is to work with Director of Student Activities Jenny Walton `08, to revitalize the weekend program. “I want to focus on capitalizing on our proximity to Washington, DC—there’s just so much opportunity for cultural and civic involvement here—and promoting on-campus weekends, which we think are key to building the community.”  In addition, he is one of three faculty members who co-chair the Student Life Curriculum program.

Communication with the parent community is a top priority for Southworth as well. He believes, “Parents play a key role in the success of their girls, both academically and socially. Boarding school is a big deal for most families, and sometimes it is more difficult for the parents to adapt than for the girls. They have faith in us; they are sending their daughters to Madeira and we need to honor the trust they have in us every day by offering the best environment and guidance that we can.” For parents of the Madeira community near and far, Southworth always looks forward to feedback as he communicates with families throughout the year.

Interacting with the students and leading the student-operated Boarding Committee gives Southworth an opportunity to mentor and challenge the girls to build their leadership skills. Every day when working with Madeira students, he strives to be a positive male role model for inspiring independent young women.